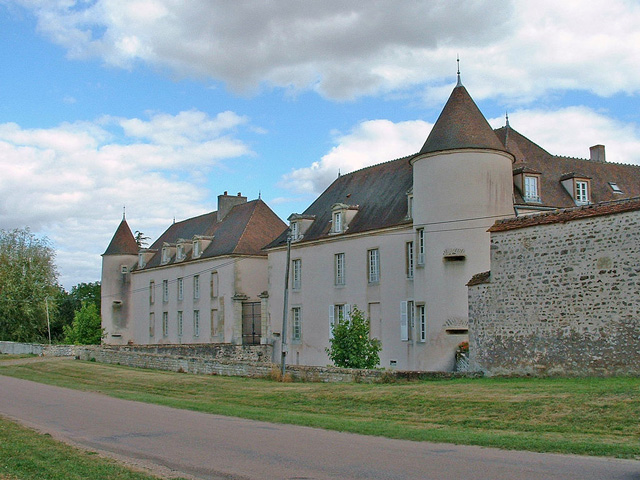 Location: Savigny-en-Terre-Plaine, in the Saône-et-Loire departement of France (Bourgogne Region).
Built: 12th century.
Condition: In good condition.
Ownership / Access: This is now the Family Centre managed by the Enterprise Committee of the Bank of France.
Notes: Château de Ragny is a medieval castle located in Savigny-en-Terre-Plaine, in the current department of Yonne. Its history is inseparable from that of the lords of Ragny, of which he was the main stronghold. The present castle, extensive construction, was remodeled and enlarged at various times since the fifteenth century. The Bank of France became the owner in 1974. It is now a family center run by its works council.The old castle was flanked by 11 towers, including one noticed the dungeon of the Square Tower, topped by loopholes and battlements, which stood in the middle of the central courtyard. He had a chapel, vaulted and frescoed, founded by Pierre de Ragny in 1422. It was demolished during the Revolution. The terrier Ragny in 1501 gives the names of the main towers of the castle: the tower room, Marsigny tower, the tower and the tower of the Wolf of Contrée. The original castle remains only a gallery with three arcades on the ground floor and dated to the late twelfth century. Dating back to the original manor house, it was probably used as a dining promenade.