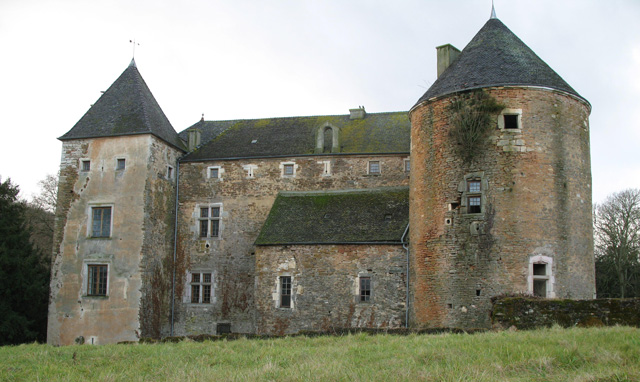 Location: Sennecey-le-Grand, in the Saône-et-Loire departement of France (Bourgogne Region).
Built: 13th century.
Condition: Restored.
Ownership / Access: Private property and not open to the public.
ISMH Reference Number: PA00113473
Notes: Château de Ruffey is located in Saône-et-Loire, in the municipality of Sennecey-le-Grand, in the hamlet of Ruffey at the bottom of a valley. It is the subject of a registration as a historic monument since December 9, 1946. Surrounded by wide ditches, dug into the rock to the north and west, the castle occupied a rectangular platform stationed three round towers and a square tower to the east. Buildings surrounded on three sides limited central courtyard to the west by a curtain pierced with a portal linking a drawbridge to the walled backyard. It remains isolated, the tower of the west angle and to the east, between the square tower and a round tower, main building of the body and a short wing at right angles which are lit by windows mullions and have beautiful fireplaces vast molded coats. A walkway reigns in the thick walls at the base of the roofs. The common feature of the same device. The castle, private property can not be visited.