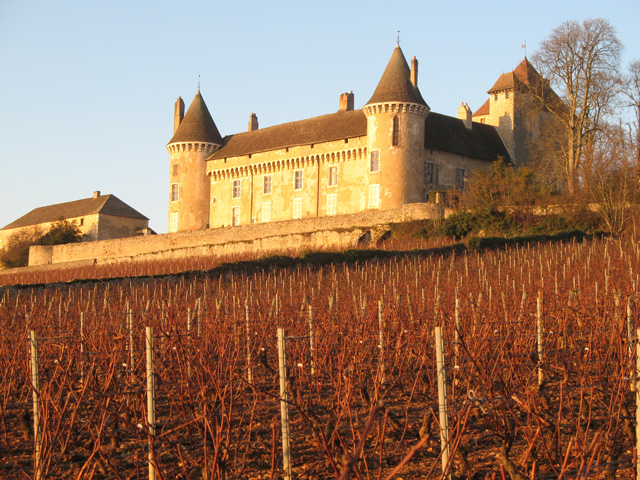 Location: Rully, in the Saône-et-Loire departement of France (Bourgogne Region).
Built: First mention in 851.
Condition: --.
Ownership / Access: Currently owned by Count Raoul d'Aviau de Ternay. Not open to the public.
ISMH Reference Number: PA00113411
Notes: The Chateau de Rully is located in the town of Rully in Saône-et-Loire, on the hillside. It dominates the whole region, facing the plain extending towards the Saône. To the west, he commanded the small valley of Agneux to Nantoux and Chassey-le-Camp. It is the subject of a registration as a historic monument since 22 February 1960.At the end of the nineteenth century, the fortified house consists of a square tower, three round corner towers and a tower flanking. All the elements, connected by curtain walls topped by a walkway, were jagged at the top and at the base protected by a broad deep ditch, passable on a single drawbridge, whose location is clearly visible on the south side . In the fifteenth century, the Saint-Léger are building on the faces east, north and west of the courtyard, buildings with beautiful oak frames, supported externally on the walkway cantilevered and covered with flat tiles Burgundy. In the late nineteenth century, the transformations are partly disappeared aspects of the fortress from the Middle Ages: filling the moat, drawbridge suppression and big doors that prevented access to the courtyard, Construction a neo-Gothic building with battlements inside the courtyard, at the foot of the dungeon. The rooms on the ground floor of the towers are vaulted rooms and corridors are covered with wooden ceilings and exposed beams. Of farm buildings with lava roofs, remnants of the old farmyard, around the large outdoor courtyard and serve as an avenue of honor in front of the gate.The castle is privately owned but can be visited.

How To Get To Château de Rully (Map):