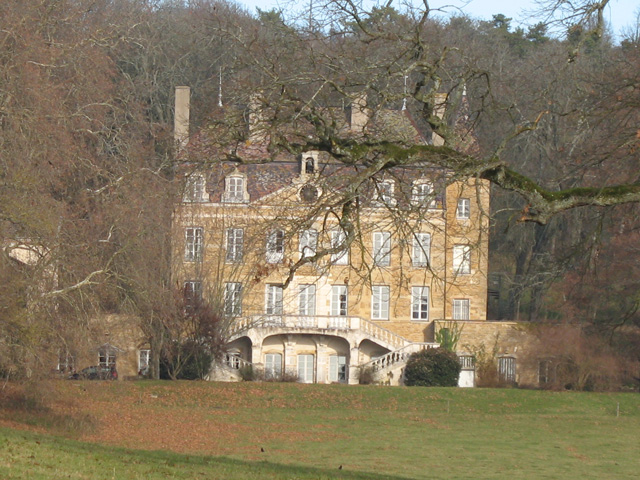 Location: Sassangy, in the Saône-et-Loire departement of France (Bourgogne Region).
Built: First mention in 1218.
Condition: Well maintain.
Ownership / Access: In 1960 the estate was inherited by Mr. Albert Bourgeon. Cannot be visited.
Notes: Sassangy Castle is located in the municipality of Sassangy in Saône-et-Loire, below the village, on a terrace overlooking a valley bottom.The castle, a rectangular plan, is built on the edge of a natural terrace, which constitutes the bedrock. In the center of the south facade, stands slightly advanced a front building of three bays topped by a triangular pediment with oculus crowned by a steeple. The north side has the same provision. Amortization balls complete the short gable dormers. On either side of the central body, headbands prevail with windowsills. Originally, the building was flanked by two pavilions, in the same alignment, cited in a 1758 census - 1759 and who were shot in 1925 - 1926. Against the gable, was then built a small square tower roof very acute. The castle is connected to the park, now almost entirely transformed into pastures by a horseshoe staircase two straight flights doubles and back rest forming square, the bearing is carried by a groin vault falling on square cells and columns. Spacious common in the seventeenth, eighteenth and nineteenth centuries occupy, east, an indentation of the cliff.The castle is privately owned and not open to visitors.