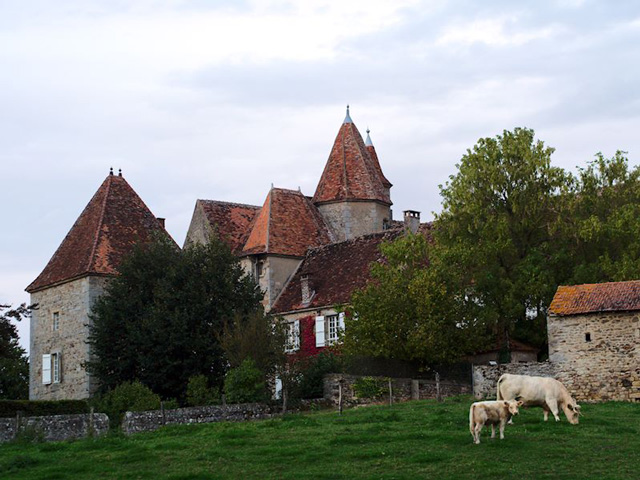 Location: Ciry-le-Noble, in the Saône-et-Loire departement of France (Bourgogne Region).
Built: 13th century.
Condition: Demolished in 15th century.
Ownership / Access: Privately owned and not open to visitors.
ISMH Reference Number: PA00113558
Notes: Château du Sauvement is an ancient castle, which dates back to the thirteenth century, which stands on the town of Ciry-le-Noble, in the department of Saône-et-Loire, in the Bourgogne region. In the Middle Ages it was the center of one of six châtellenie Charolais County.The castle is the subject of a partial inscription as historical monuments by order of May 27, 1991.Demolition of the original castle left a chapel, visible on the plans of the eighteenth century, and few walls with one still in place. The present building is the result of development in the sixteenth century, the house of the castle weapons people located on a nearby hill. The home of various heights under tile roofs flat gable, surrounded on three sides a courtyard. In the center of the fourth side, rises high gatehouse breakthrough on the ground floor of a carriage gate and a pedestrian gate semicircular, surmounted the slots of the balances of a drawbridge and a gateway and, above the latter, two turrets on consoles. Headbands in vermiculé boss prevail between levels; rusticated pilasters vermiculé one in two in the front frame and separate the doors of the ground floor. Two small round towers flank the outer corners of the north wing, a third circular tower, which defended the southeast corner, disappeared in the late nineteenth century, a large square tower based talutée occupies the southeastern corner west of the quadrangle. Equipped north of a watch tower pierced by a archer-gunboat, she is approached to the courtyard of a tower staircase seven-sided spire topped by a torso, herself accosted a turret overhanging cap molded cone. Tower and turret are pierced with ogee lintel bays. The ditches that surrounded the castle to the north and east were filled. To the south, a terrace is flanked by a square dovecote that borders a hedge cut into bone. The castle is a private property and can not be visited.