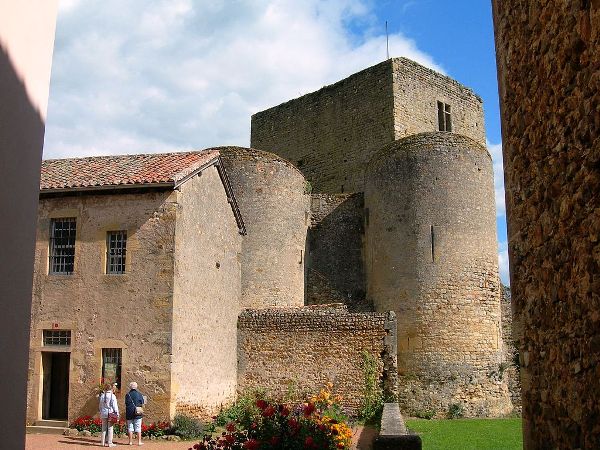 Location: Semur-en-Brionnais, in the Saône-et-Loire departement of France (Bourgogne Region).
Built: 10th century.
Condition: Been developed in 1968.
Ownership / Access: currently owned by the municipality and it's open to visitors.
ISMH Reference Number: PA00113468
Notes: The castle of Semur-en-Brionnais is located in Semur-en-Brionnais in Saône-et-Loire, at the narrowest point of a rocky outcrop. This castle is the subject of a registration as a historic monument since 13 October 19711. The castle of Semur-en-Brionnais is one of the oldest in Bourgogne2. This is also the place of birth of St. Hugh.From the fortified complex that occupied the entire rocky spur, there remains only the remains of a postern and, on a terrace, a tall tower with a rectangular plan. The gate totally changed by the work undertaken in 1760, consisted of a door upstairs, defended by a portcullis and a battlements on arcade of the same type as those of Chamilly and Sercy. This one was launched between two round towers, slightly sloped bases, very few archers pierced embrasures plunge. The door was blocked and stairs were built to provide access to its location on the first floor of the towers. The north tower has a cistern, West Tower, a staircase housed in the thickness of the wall. The rectangular tower, 22 meters high and with walls at the base of two meters thick, has holes in beams of four floor levels. If the first levels of the dungeon foundations appear to date from the late tenth century, most of the construction is the result of successive reshuffles the eleventh century to the fifteenth century. The lower levels are built in camera means in which appear seating fishbone, the third and fourth levels in small device. It discerns, in the walls, arched openings that were sealed, a small door on the first floor which seems to indicate that a rectangular frame gateway closed, finally, to the south and west, two windows mullioned and cross whose doorways are fitted with coussièges and are probably contemporary with a huge fireplace which only remain the piers.The substructures of a small tower overlooking the valley.

How To Get To Château de Semur-en-Brionnais (Map):