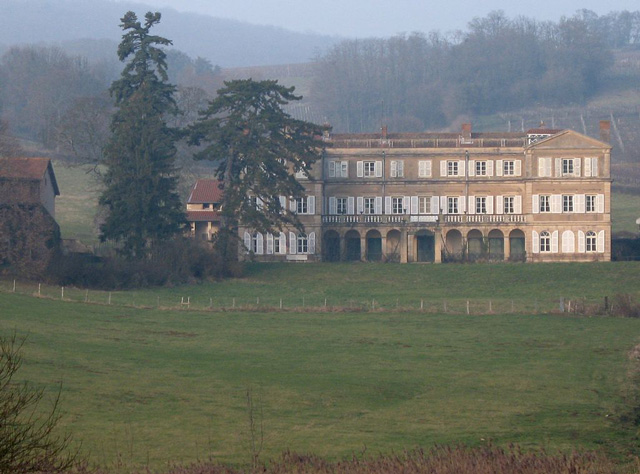 Location: Péronne, in the Saône-et-Loire departement of France (Bourgogne Region).
Built: 15th century.
Condition: Ruined.
Ownership / Access: Private property and not open to visitors.
Notes: Château de Vaux-sous-Targe is located in the town of Peronne in Saône-et-Loire, in the valley. The castle itself is the subject of a classification as historical monuments since July 2000 while some outbuildings (cellar, dovecote, outbuildings, park, pond) have registered since February 22, 2000.The construction includes a H covered flat roof building plan and formed of a central body and two wings at right angles on the two main walls. The south facade of the central body is preceded, on the ground floor, a gallery of seven semicircular arches connecting the two wings and supports a terrace with a balustrade. The central arch, wider and emphasized by pilasters, serves the gateway. Horizontal entablatures overcome the lintels of the first floor window ledge that separates the second floor. The wings are crowned with pediments, the central body of a balustrade. Corners finishing the pilasters emphasize angles. To the north, a gallery on the second floor columns reign. The castle, whose architect is not known, was decorated by Italian painters. In the apartments remain beautiful panoramic wallpapers and Restoration-style furniture. Common extend east. The moat of the original fortress, which had been retained in the second building, were subsequently dried and transformed into gardens.The castle is privately owned and not open to visitors.

How To Get To Château de Vaux-sous-Targe (Map):