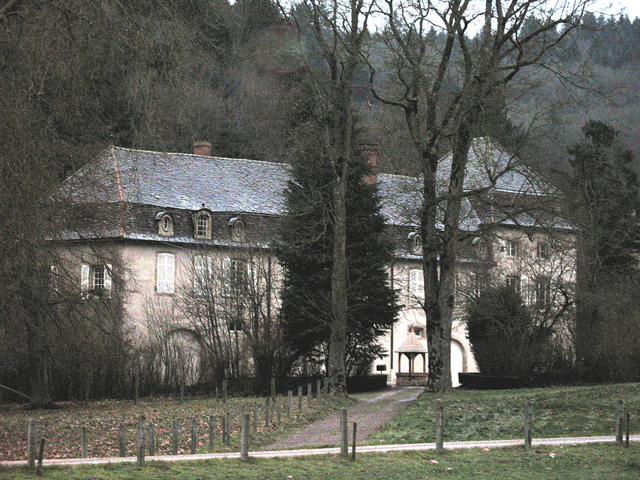 Location: Lucenay-l'Évêque, in the Saône-et-Loire departement of France (Bourgogne Region).
Built: 13th century.
Condition: In good condition.
Ownership / Access: Private property and its not open to the public.
ISMH Reference Number: PA00113540
Notes: Château de Visigneux is located in the town of Lucenay-Bishop in the Saône-et-Loire, in the Ternin Valley, surrounded by a few houses.It is the subject of a registration as a historic monument since April 5, 1990.A rectangular main building flanked to the north of a two-story lodge is the old castle. The roof of small tiles, the upstairs windows and skylights stone - alternately rectangular and round - seem to date from the seventeenth century and the eighteenth century. On the west façade, the openings have been changed but the pedestal protruding at the base of the wall and the moat in front of the wall seem to be the remains of the fortress from the Middle Ages. Not far east of this building stands the castle built in 1885 by architect Ernest Sanson, who was also one of the castle of Rochefort in Côte-d'Or. The rectangular confined by a round tower and two square towers is organized around the central vestibule which contains the staircase. This is a two-stage construction entirely of granite: over a projecting pedestal, small irregular apparatus walls is punctuated between each stage of a projecting strip and angles are matched harp. Everything here was made with extreme care in the details: the window frames is topped with a molded headband, a small bead dampens the chamfer of splays, consoles are corbelled chimney of the round tower. The sloping tiled roof accentuated with its triangular pediment dormers, tall chimneys and its crests and finials is a reminder of the sixteenth century style. To the west of the castle, a grassy lawn and box trees is arranged around ponds beyond which the view extends to the Ternin Valley. This garden is dominated by a terrace on which stands the orangery three bays built at the same time as the castle. On the side are still a dovecote and a common building. Beyond the garden, to the west, lies the small arcade-high bell tower chapel by the same architect: it replaced the old chapel dedicated to Saint George, demolished in 1848.