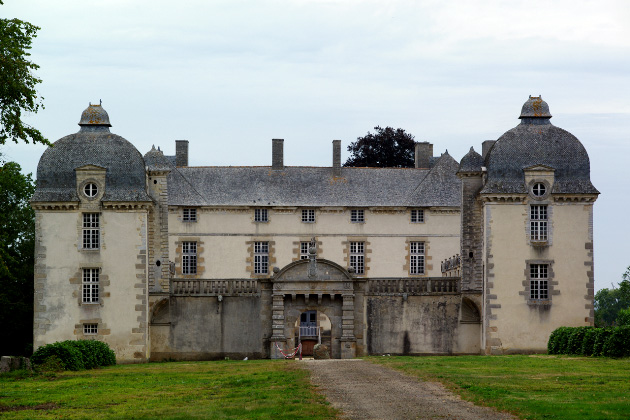 Location: Évran, in the Côtes-d'Armor departement of France (Bretagne Region).
Built: 17th century.
Condition: In good condition.
Ownership / Access: Privately owned.
ISMH Reference Number: PA00089147
Notes: Château de Beaumanoir is a castle Évran in the Côtes d'Armor. The castle is a building with four bodies surrounding a rectangular courtyard flanked by two wings perpendicular to common use. In the south, the courtyard is enclosed by a wall which runs a walkway with balusters accessible by two side staircases. In the thickness of the wall, opens a monumental gate of Italian Renaissance inspiration. This portal surrounded by pilasters flattened projections comprises, in its upper part, the architrave and a damped curve fronton spheres supported by a console battlements. Dominating all, a statue of Eros and the tympanum of the pediment, the arms of Langle-Beaumanoir family. cherubim of figures carved on the architrave. The walkway is flanked by two square towers with roofs hulls topped with lanterns. At the ramparts, the towers are supported by figures of caryatids, hammered in part by the owner, in the nineteenth century, offended, they say, by the sight of their large breasts. The chapel, located in the eastern tower is octagonal. Its vault is supported by eight concentric Ionic columns in the Quiou gauge stone. It has an altar in oak and an altarpiece of the seventeenth century. The altar and the altar, decorated with acanthus leaves, oak and laurel, united into a sculpted bouquet, are typical of the Louis XIII style. At the base of the tower, was the crypt were buried members of the Langle-Beaumanoir family who occupied the castle for nearly two and a half centuries, until 1947. The General Council of the North Coast, get carried buyer in 1963, restored from ruin.

How To Get To Château de Beaumanoir (Map):