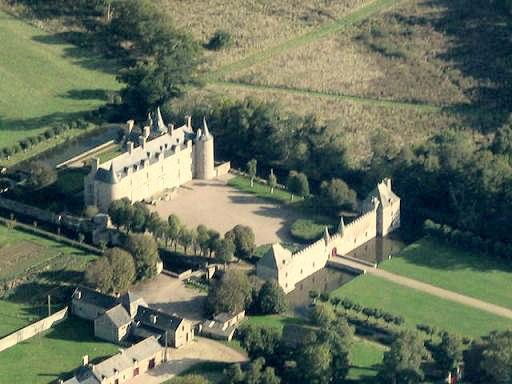 Location: Erquy, in the Côtes-d'Armor departement of France (Bretagne Region).
Built: 15th century.
Condition: In good condition.
Ownership / Access: Kerjégu family.
ISMH Reference Number: PA00089143
Notes: Château de Bienassis (fifteenth - seventeenth century) is located on the territory of the municipality of Erquy in the Côtes d'Armor in Brittany. It is the subject of a classification as historical monuments since August 29, 1945 (replaced in 2012 and 2013 by orders of more general rankings.The first castle Bienassis was a sixteenth-century mansion surrounded moat of a property of the family of La Motte, the lords of La Motte-d'Erquy it seems. John Quelennec, Quelennec Lord in Quintin, who married Tiphaine du Fou in 1374 acquired the land Bienassis. His son Geofroy of Quelennec built the house around 1434, when the new manor is attested. In 13413, a text relating to the manor it is reported as "an old room of the old post faczon based boays (posts) by way of crowd (hall)." It was occupied by the troops of the Duke de Mercosur during the wars of the League in the late sixteenth century, partly destroyed and rebuilt as from 1620 by Gilles Visdelou Lord of La Goublaye in Saint-Alban and his wife Françoise Quelennec. It passes by marriage to Count Lambarc and the Duke of Arenberg, then, in 1760, the castle was sold to François-Louis Visdelou City-Théart, Commissioner stud Britain. At that time, the field includes 39 farms, 7 mills, and extends over 1,000 hectares. Confiscated during the Revolution, it will serve in prison. In 1796 it was bought by General Jean Valletaux, General of the French Revolution and Empire General and Member of the North Coast. In 1880, the family's Pomellec, his descendants sold it to the Jules Kerjégu admiral great navigator. He moved there after taking part in all the major campaigns of the century expeditions Mexico, Crimea, China and Cochinchine.Ce castle is today still owned by the family of Kerjégu. Castle Biennassis, the grand staircase, the entrance postern, garden and driveway were classified historic monument August 29, 1945. This ranking is replaced by another ranking in 2012, itself replaced by a ranking more General April 25 2013.

How To Get To Château de Bienassis (Map):