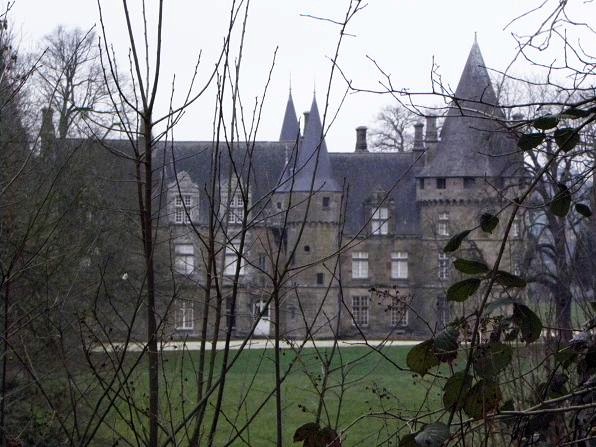 Location: Antrain, in the Ille-et-Vilaine departement of France (Bretagne Region).
Built: 11th century.
Condition: Well maintained.
Ownership / Access: --
Notes: Château de Bonnefontaine is in the town of Antrain, Ille-et-Vilaine, France. The castle, for its facades and roofs as well as the well, the subject of a registration as a historic monument since 16 September 19432. The elegance of the turrets that adorn its large main building, tall windows, skylights carved correct the severity of his stubby towers machicolated topped with pepper-pot roofs. Bonnefontaine The park was designed and built by the famous landscape Denis and Edouard André Bühler (1840-1911). This is Denis Bülher which must, among many others, Thabor gardens in Rennes, and Edouard André Parc Monceau in Paris and London's Hyde Park. The Bonnefontaine landscaped park, told the English, is typical of the romantic taste of the second half of the nineteenth century period in which it was achieved. The principle of Bonnefontaine park is a composition of vast natural areas drilled wide perspectives framed plantations or groves in successive plans. Numerous species planted during the creation of the park are still present, such as redwoods, taxodium (bald cypress) Taxus cinencis (if China), magnolias, cedars, palm trees, beeches etc. It may be noted as a curiosity "the tree of Anne Duchess". This chestnut, lying on the side of the main aisle, wearing a sign saying that "Britons have the memory of their last duchess, Anne of Brittany, who sat under the tree toppled by the 1987 storm." The park is classified "Remarkable Garden".

How To Get To Château de Bonnefontaine (Map):