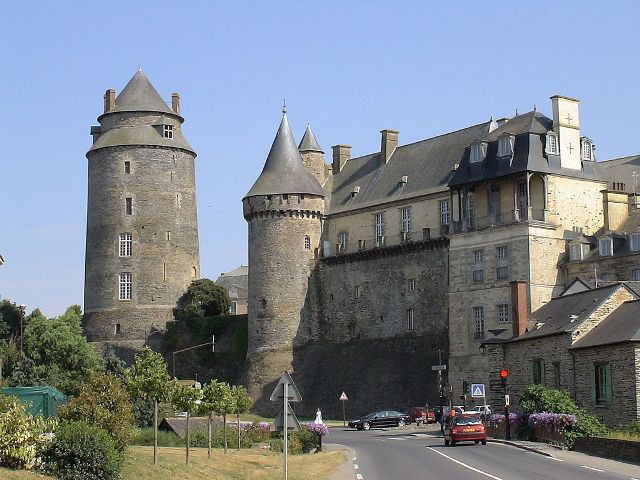 Location: Châteaugiron, in the Ille-et-Vilaine departement of France (Bretagne Region).
Built: 13th century.
Condition: Remodeled and enlarge in 18th century.
Ownership / Access: Owned by the municipality.
ISMH Reference Number: PA00090526
Notes: Château de Châteaugiron is a castle located in the town of Châteaugiron in the Ille-et-Vilaine, France. This medieval fortress, renovated in the fifteenth century by Jean Derval remain important remains. The castle had six towers, a gatehouse with a drawbridge and a stately home.The oldest part consists of the choir of the chapel of Romanesque style (thirteenth century). Four towers still stand: the keep, the independent origin of the castle, which dominates the town from its height of 38 meters; the clock tower that served as a belfry; Lookout towers and the Cardinal, they were probably built by Jean de Derval and retained their walkway on battlements. The processing carried out by the "Hajnal" the eighteenth century consisted remodel and enlarge the house in an architectural style to the French. Thus one of the corner towers was demolished to make way for a pavilion with wooden gallery which continued on the old path round. Large gardens were built while the old gatehouse which gave access to the castle from the city was also modified in a complex of buildings disparus2 today. The castle has multiple protections as historical monuments: an inscription in 1929 for the castle, a ranking in 1931 to the towers, and a ranking in 1993 for facades and roofs of the entire chateau.