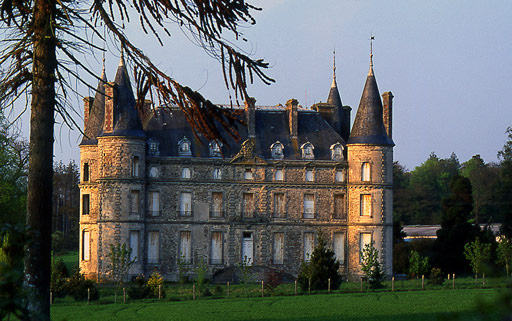 Location: Belle-Isle-en-Terre, in the Côtes-d'Armor departement of France (Bretagne Region).
Built: 1880 and 1884.
Condition: Restored.
Ownership / Access: Privately owned.
Notes: Château de Coat-an-Noz is located south of the town of Belle-Isle-en-Terre, in the Côtes d'Armor department, near Loc-Envel in the forest of Coat-an-Noz. It was built between 1880 and 1884 by the Countess of Sesmaisons (1838-1901). The castle became, by marriage, the property of Messrs Faucigny-Lucinge. Bertrand de Faucigny-Lucinge, heavily in debt, sells the castle and the vast area surrounding it in 1923. In 1929, Sir Robert Mond, king nickel, bought the castle for his wife Lady Mond, born Marie-Louise Manac'h The native of Belle-Isle-en-Terre. After his death in 1949, the castle passed into the hands of various owners who are unable to fully restore this vast edifice. In 2011 the castle was bought by individuals who restore it.

How To Get To Château de Coat-an-Noz (Map):