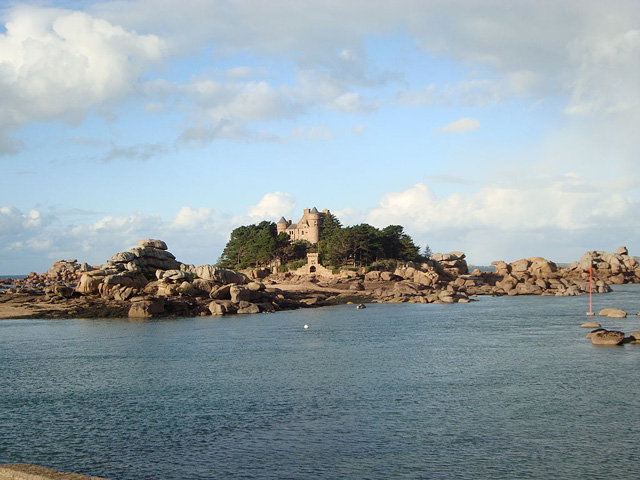 Location: Trégastel, in the Côtes-d'Armor departement of France (Bretagne Region).
Built: 1892.
Condition: In good condition.
Ownership / Access: --
Notes: Château de Costaérès is located on the Island of Costaérès in the territory of the French town of Trégastel, Côtes d'Armor, Brittany. Castle term is overused, it's actually a big neo-medieval style mansion typical of the great summer houses of the late nineteenth century to the pink granite coast. The building complex in volume after several expansions, is made of pink granite from the quarries of clarity, district of Perros-Guirec. The roof is slate. Its interior was designed with reclaimed wood from a three-masted failed in winter 1896, Mauritius It was built on an island bought by Bruno Abakanowicz (also called Bruno Abdank, who built a little later about 1896 the Hotel Bellevue in Ploumanac'h), engineer and mathematician of Polish origin at the end of summer 1892 the customs René Brozec a Perrosien who cultivated there potatoes and was dry lichen and fish. The deal of the time was 0.25 franc per square meter. It was completed around 1896 by the Lanmoniez engineer and entrepreneur Pierre Le Tensorer Lannion. After 1900, when the owner dies, his daughter, Sofia Abakanowicz, now Madame Poray, had enlarged the villa from one wing to the west in return on the rear facade. During the Second World War, the villa was requisitioned by the German army, and suffered some internal damage. Following roofing, September 6, 1990, a fire destroyed part of the building interior. The image of this castle on the island is often used to illustrate postcards and tourist guides of the Côte de Granit Rose, Côtes d'Armor and Brittany.