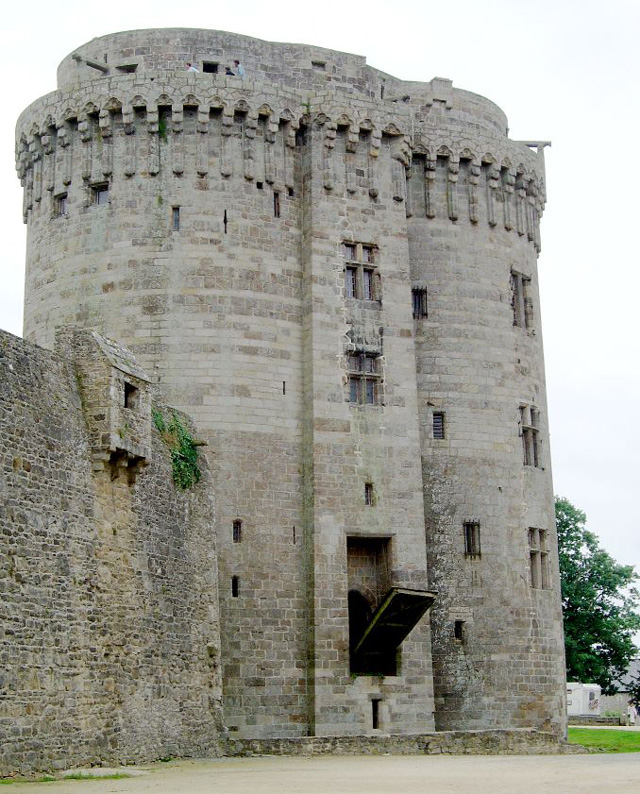 Location: Dinan, in the Côtes-d'Armor departement of France (Bretagne Region).
Built: 14th century.
Condition: In good condition.
Ownership / Access: Owned by the municipality.
ISMH Reference Number: PA00089071
Notes: Château de Dinan (Côtes d'Armor) actually consists of Donjon, said the Duchess Anne, near the Porte Saint-Louis. The keep and the gate are part of the 2600 meters of medieval walls that still surround the old town. This monument is the subject of a classification as historical monuments since July 12, 1886.John IV the Conqueror, Duke of Brittany, launched the construction of the tower in 1384. High oval tower, moat separates it from outside the walls but also the inner city. The battlements overlook 30 meters of cut stone walls, but some elements have been made of wood [ref. desired]. In 1693, the military engineer Simeon Garangeau pupil of Vauban draw up a report after the inspection of the fortifications of Dinan. He suggested the work to transform the dungeon prison and throughout the eighteenth century, the castle will have a prison intended for prisoners of war, then host of common criminals. It was not until 1906 that the municipality bought the castle to make restoration and will house its musée.

How To Get To Château de Dinan (Map):