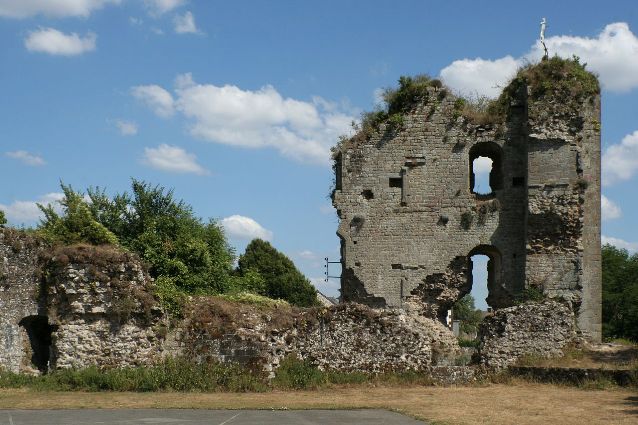 Location: Hédé-Bazouges, in the Ille-et-Vilaine departement of France (Bretagne Region).
Built: 11th-15th century.
Condition: Ruins.
Ownership / Access: Owned by the municipality.
ISMH Reference Number: PA00090599
Notes: The ruins of Château de Hédé are the remains of a castle in Brittany France, in the town of Hédé-Bazouges. A stone tower was built in the twelfth and thirteenth centuries to the west of the city, replacing the castralen mound 1. It consisted of a square plan, with buttresses at the corners of a basement of a ground floor and three floors. The entrance was on the first floor to the courtyard to the west; The ground floor served as a reserve and the defense of the book; higher levels were vested in the home. The walls were measuring 4 meters thick and 22-23 meters high. The enclosure with nine sides of the yard dated meanwhile been reconstructed by Duke John IV in the late fourteenth century. It has caponnièresn 2 corners. The French took possession without resistance in 1488 after their victory at the Battle of Saint-Aubin-du-Cormier; Philippe Emmanuel, Duke of Mercoeur, made himself master in 1597, and Henry IV demolished the following year at the request of the population. All that remains is the portion of the dungeon, and the curtains of the barnyard. These remains are the subject of a registration as historical monuments since October 14, 1926.1 They are occupied by lots of basketball, one of which was converted into skateboard track since summer 2015.