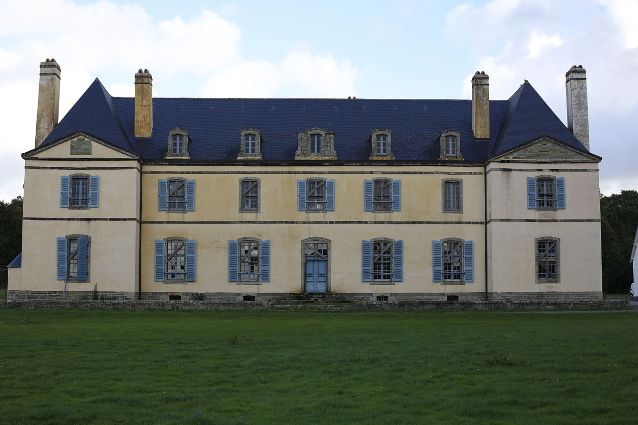 Location: Carhaix-Plouguer, in the Finistère departement of France (Bretagne Region).
Built: 1760.
Condition: Under restoration.
Ownership / Access: Privately owned.
ISMH Reference Number: PA00089859
Notes: Château de Kerampuil is located at a place called Kerampuilh, less than a kilometer from the town center from Carhaix-Plouguer, Finistere.Castle of regular plan, built around 1760 for Charles Robert, adviser to the Parliament of Britain, including a central main building and two protruding wings. The castle is still owned by the family of Kerampuil until the Revolution and its sale as a national asset. Under the Restoration he returned to the family who gave it in 1939 provided that it serves hospice. Chapel built in 1840 (gate time) for the Viscount of Saisy. With hospice transformation, the building lost all its interiors apart a large wooden staircase with double revolution with balusters and a few doors Elements protected as historic monuments: the facades and roofs of the castle: registration by order of 12 July 1965. The transfer of the headquarters of the State Office of the Breton language at Castle Kerampuilh was provided by the Bretagne Regional Council. Kerampuilh The site also hosts the annual Festival of the Old Plough. Coincidence of history, Emmanuel Joseph Saisy Kerampuil, one of the former owners of the castle, had organized in 1833 a festival to encourage local agriculture: the feast of "five hundred plows".

How To Get To Château de Kerampuil (Map):