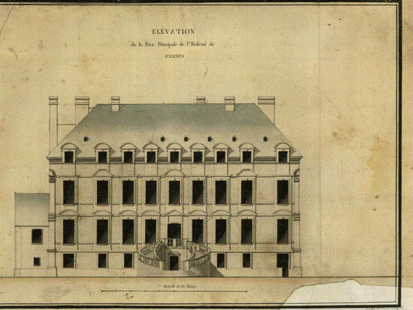 Location: Vannes, in the Cotes-d-Armor departement of France (bretagne Region).
Built: 10th century.
Condition: --.
Ownership / Access: --.
Notes: The castle of La Motte, is a castle disappeared, formerly located in the town of Vannes in the Morbihan. The castle was rebuilt several times, was successively a residence of the kings and counts of Vannes, the episcopal seat of the bishops of Vannes and the hotel of prefecture of the department of Morbihan.The oldest residence of power in the city, the castle of La Motte was leaned against the Notre-Dame tower north of the first enclosure of the city on the highest part of the city. This castle was built around the 5th or 6th century and was the residence of King Eusebius at the beginning of the sixth century, although sources mention a later date for its construction (ninth or tenth century). Before the castle was ruined by the Normans at the beginning of the tenth century, this fortress was the home of the Counts of Vannes. Restored by the Dukes, it is temporarily inhabited by Pierre Mauclerc and Jean Ier.