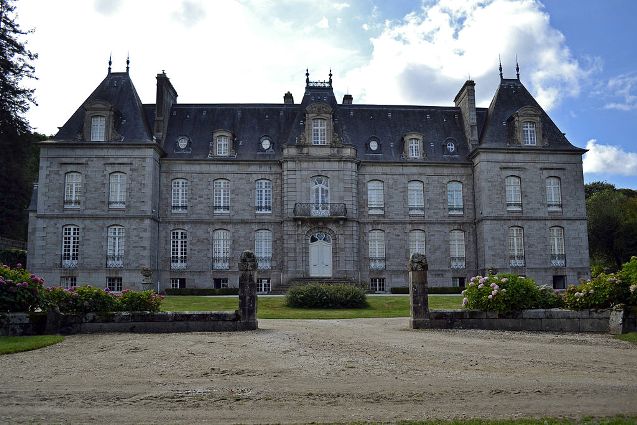 Location: Pleyber-Christ, in the Finistère departement of France (Bretagne Region).
Built: 16th-18th century.
Condition: Restored.
Ownership / Access: Privately owned.
ISMH Reference Number: PA00090167
Notes: Château de Lesquiffiou is a Breton castle, built in the seventeenth century, situated in the municipality of Pleyber-Christ in the Finistere department.Built in the seventeenth century (the central main building dates from 1698), probably on the site of an earlier mansion which there remains the dovecote dating from the sixteenth century. Lesquiffiou was once a castle-with right of low justice and high justice which the gallows stood at Coat-ar-Justiçou and its jurisdiction extended to part of Saint-Martin-des-Champs. It belonged successively to the families De Kerguennec, Le Borgne Kerguidiou, Barber of LESCOET and Chabannes. Two wings built in the eighteenth century have been destroyed since the width and the main building was doubled in the nineteenth century by adding a new façade in Louis XV style. The castle was destroyed during the French Revolution but later restored. The estate also includes a farmhouse built between 1861 and 1863 by the Marquis of LESCOET, to make a agriculture1 school.This castle has a remarkable library: for example it is in its rays has been found in the early twentieth century the story of the life of Jean Conan, nicknamed "Guingamp" as born in this city, who wrote in his autobiography a manuscript named Avanturio ar Citoien Jean Conan Voengamb ( "citizen's Adventures Jean Conan Guingamp") found by chance, connected in a cowhide in the castle library of Lesquiffiou. It describes in particular soldier tribulations of the Year II, Jean Conan is calling himself a "poor man", wrote the text at the end of his life when he was installed as a weaver in the town of Trédrez . He was successively small drum in the royal militia at the time of Louis XVI, cod fishing off Newfoundland, caulker in the port of Brest, soldier Republic. The architectural interest of the castle has been recognized by the French State as soon 1974. Thus the facades and roofs of the castle, some of the interior (living room, dining room, Louis XV style), the courtyard and the French garden with its railing, the dovecote and the model farm are protected: now all subject to a registration as a historic monument since 19 November 1992.

How To Get To Château de Lesquiffiou (Map):