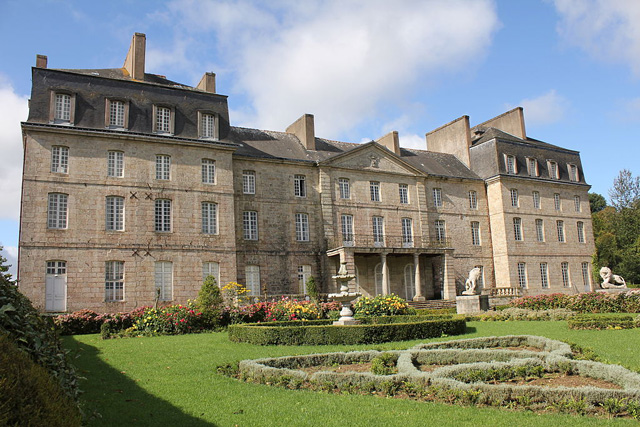 Location: L'Hermitage-Lorge, in the Côtes-d'Armor departement of France (Bretagne Region).
Built: 1721-1740.
Condition: In good condition.
Ownership / Access: Privately owned.
ISMH Reference Number: PA00089202
Notes: Château de Lorge is located in the town of L'Hermitage-Lorge, Côtes d'Armor. It is the subject of a registration as historical monuments since 26 June 1963. During the French Revolution, the castle was the scene of a drama chouan. Grenadiers and flush out the National Guard is a royalist, Ms Le Frottier of Kerilis, who had been arrested and sentenced to death after a summary trial. To reduce fatal date, she said enclosure, allowing his two son to organize its removal from the prison of Saint-Brieuc. Successful operation. They take refuge in the castle of Lorge, uninhabited for twenty years, but the Blues are quick to catch up and kill Ms. Le Frottier of Kerilis and one of his son. Another story is about twenty dead and bloody steps. The iron plant has a very deep mining in forest Lorge. The passage of the railroad after 1880 ensures the sustainability workshops, processed foundry second fusion. His little modern techniques and isolation, however, lead to a sudden cessation in 1978.

How To Get To Château de Lorge (Map):