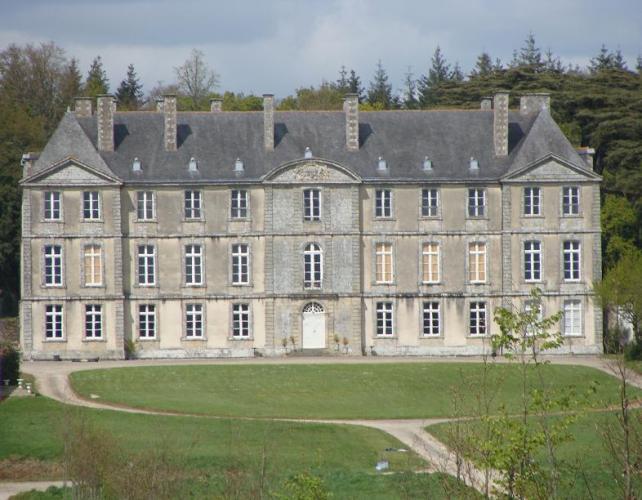 Location: Loyat, in the Morbihan departement of France (Bretagne Region).
Built: 18th century.
Condition: In good condition.
Ownership / Access: --
ISMH Reference Number: PA00091413
Notes: Loyat Castle is a castle of the eighteenth century in Loyat, near Ploermel, in Morbihan department.Ancient fortress under the Viscount of Porhoet Loyat Castle was built in the early sixteenth century by Beatrice Rostrenen, wife of Jean d'Acigné. Louis Coëtlogon, Attorney General and trustee of Brittany States, bought the castle around 1675, but it is in poor condition and not easily restorable. The decision is made to build a new castle in the extension of the original fortress. His son, René Charles Coëtlogon, Viscount of Loyat, who inherits uses Vannes architect Olivier Delourme. His uncle, Alain Emmanuel de Coëtlogon, future Marshal of France and vice-admiral of the Levant, participates in the financing of the operation. Rebuilt between 1718 and 1734 the castle Coëtlogon fate of the family in 1791 to the death of the last Viscount of Loyat, Emmanuel Louis, said the count Coëtlogon, Lieutenant General of the King's armies, who died without issue. Due to the large number of heirs, the castle was sold. He always carries his granite pediment crest three banners Britain Coëtlogon coat of arms (gules three ermine badges). The castle has hardly been revamped since then, except the park. In 1830, the new owner Count Champagny, removes the moat to create the aisle, and rearranges some of the terraces. Remained in the same family since 1885, the Castle of Loyat is now surrounded by a forest of 160 hectares. The castle, with its entrance pavilion, its dependencies, ponds and park, is entirely classified as historical monuments by order of 8 June 1945. In 2008, the restoration of the main facade of the castle facing south is carried out with the help of the Regional Directorate of Cultural Affairs for 25% of the Regional Council of Brittany and the General Council of Morbihan. These works concern the protrusions of the façade, namely its central span and two pavilions and two isolated pavilions.

How To Get To Château de Loyat (Map):