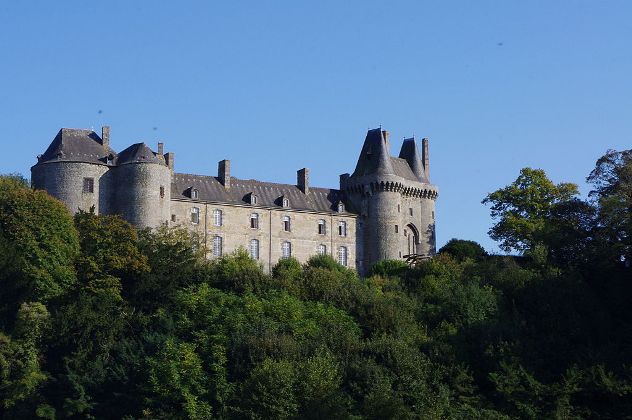 Location: Les Iffs, in the Ille-et-Vilaine departement of France (Bretagne Region).
Built: 12th century.
Condition: In good condition.
Ownership / Access: Privately owned.
ISMH Reference Number: PA00090603
Notes: Château de Montmuran, strong historical monument for the region, is located in the town of Iffs in the Ille-et-Vilaine department, between Rennes (28 km) and Saint-Malo (49 km). It is the subject of a classification as historical monuments since September 17, 2003.In the year 1032, Alan III built the Abbey Saint-Georges de Rennes to house his sister Adèle. Alain puts it this way and under the terms of the time: "I, Alain, Duke and Prince of the Breton nation, worried as I could exchange my worldly goods against those of eternity, here is my first treasure my sister (sister), the more valuable that I have under the sun, I offered to god ... and according to his pious desire, I devoted his vou (vow) of perpetual virginity ... and I presented him a suitable place to live the life of the cloister. It is located at a stage of the rampart of the city of Rennes. " Alain III assistant to its offer the lordship of Tinténiac with a right of high justice, that the Abbess Adele turns into Donoual stronghold for the knight, who is asked to build a castle to protect his land. The Donoual Knight took the name of Donoual Tinténiac4. The family of Tinténiac is therefore built the first castle in 1036 on the site of the city. But this castle, built in wood as the old fortresses, is quickly destroyed and razed in 1168 by the Plantagenets. Later, in the course of the twelfth century, Abbess, feeling powerless to carry out the defense of its land application building a real stone fortress. In 1170 the lord of Tinténiac is therefore building a new stone castle which there remains at least two turns in the present castle (the tower).

How To Get To Château de Montmuran (Map):