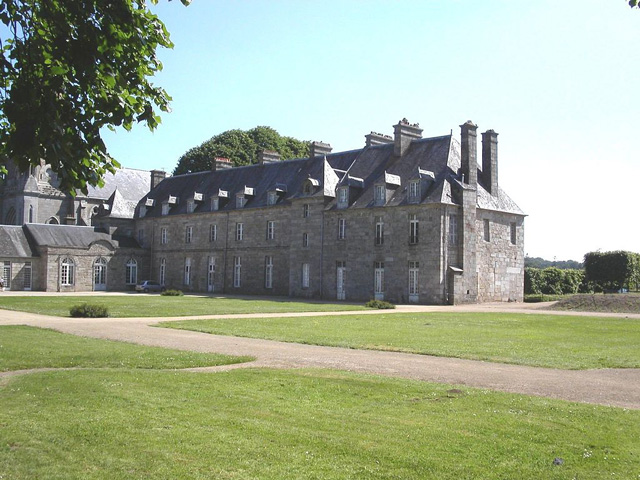 Location: Quintin, in the Côtes-d'Armor departement of France (Bretagne Region).
Built: 17th and 18th century.
Condition: In good condition.
Ownership / Access: Privately owned.
ISMH Reference Number: PA00089554
Notes: Château de Quintin actually consists of two castles, two chateaux in the same park in the heart of the small town character of Quintin: a castle of the eighteenth century, unfinished, registered 28 May 1951 as historical monuments, and a castle from the seventeenth century, which is the subject of a classification as historical monuments since November 4, 1983.One of the nine baronies of Britain, the lordship of Quintin was born in the thirteenth century the division of Penthièvre County. Seat of feudal power, the Château de Quintin suffered a succession of wars during the fifteenth and sixteenth centuries. Only are preserved medieval city, pregnant and Porte-Neuve, made up in part by former Archives Tower Castle Quintin. In 1691, Quintin is erected in duchy. After being one of the last bastions Protestants in the seventeenth century, the castle rebuilt in 1775 remained unfinished. In the eighteenth century, its common and stables were renovated and extended to form the current Château de Quintin. Steeped in history, the lordship of Quintin and his castle, has since its inception been kept within the same lineage. Rohan, Laval, Coligny, La Tremoille, Gouyon of Moussaye Durfort de Lorges or Choiseul are among the most prestigious families have inherited this area through the centuries. The Frotier family Bagneux, current owner, performs the restoration, maintenance and animation of this fine historic: the public opening of the castle in 1986 allows to gradually restore its gardens and its interiors. Today it is possible to see the restoration of French gardens, castle eighteenth lounges, showrooms current and former stables. The next restoration campaigns concern the seventeenth castle and basements. Unfinished when it was built in the 17th century, the old home of the castle of Quintin undergone a major restoration program, under the responsibility of the Chief Architect of Historical Monuments Christophe Batard. The first phase of the work concerns the upper parts of the central building and the east and west pavilions, with the restoration of the cornices and fireplaces. They are the companions of the agency Saint Brieuc Lefèvre who are at work on the building. This restoration, financed 60% by the State and the Region of Brittany, will take several years from the summer of 2013.