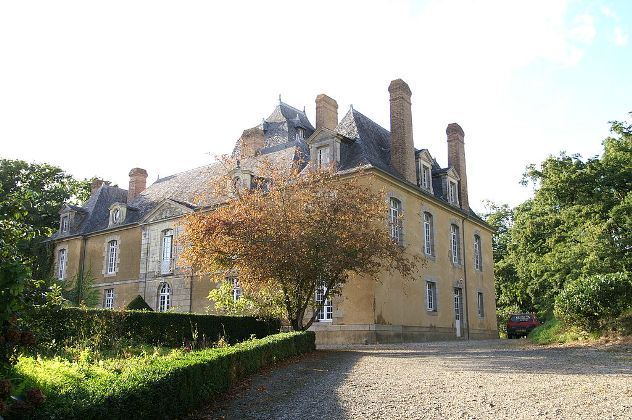 Location: Poligné, in the Ille-et-Vilaine departement of France (Bretagne Region).
Built: Rebuilt in 18th century.
Condition: Restored.
Ownership / Access: Mrs. Berthélémé.
ISMH Reference Number: PA00090661
Notes: Château du Bois Glaume is a French eighteenth-century castle located in the Brittany town of Poligne in Ille-et-Vilaine, 29 kilometers from Rennes. It replaces an old medieval castle. Castle Bois-Glaume is registered as a historic monument since 1972. The estate once owned by William, Lord of Poligné, was a former chatellery exercising a right of high justice in Britain. The original castle was a medieval building, rebuilt in the Renaissance. It will be destroyed at the beginning of the eighteenth century to make way for the present castle. This is surrounded by a large park, planted mainly of oaks, and a pond. The castle remained abandoned for nearly a century before being taken over and restored by the current owner, Mrs. Berthélémé, making B & Bs.

How To Get To Château du Bois Glaume (Map):