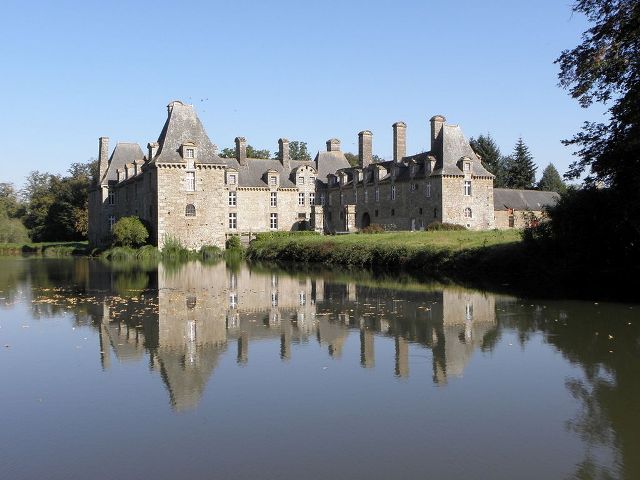 Location: Saint-Brice-en-Coglès, in the Ille-et-Vilaine departement of France (Bretagne Region).
Built: 17th century.
Condition: In good condition.
Ownership / Access: Privately owned.
ISMH Reference Number: PA00090768
Notes: Château du Rocher-Portail or Rock-Senechal is a castle of the seventeenth century located in Saint-Brice-en-Coglès in Ille-et-Vilaine. The building is classified as historical monuments by order of 27 September 1961. This castle-mansion, built in rubble, with granite bays frames, wears beautiful roofs with cornices in corbels to the roof base . Built from 1603 to 1607, it has a central body flanked by two wings angled: one opens onto the courtyard by an elegant Renaissance Italianate gallery, with fluted pilasters at the end of which stands a chapel equipped with gunboats; the other with a central portal, contained cellars and reserves. This is one of the three castles of Gilles Ruellan he built with that of the Ballue in Bazouges-La-Perouse and of Monthorin to Louvigné-du-Désert.