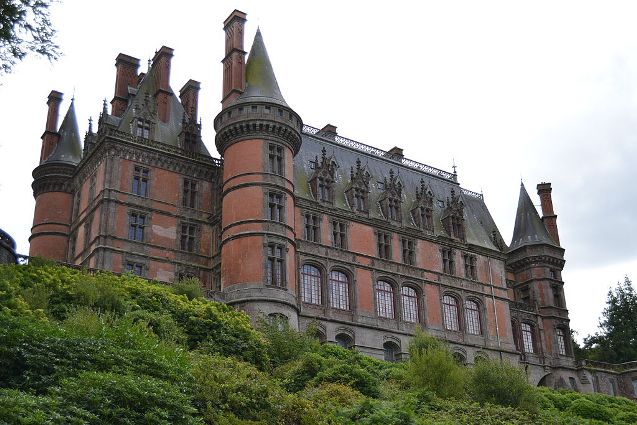 Location: Saint-Goazec, in the Finistère departement of France (Bretagne Region).
Built: 18th-19th century.
Condition: Renovated.
Ownership / Access: Owned by the department.
ISMH Reference Number: PA00090415
Notes: Château de Trévarez is located in the municipality of Saint-Goazec, in Finistère in Brittany. Built in the late nineteenth century by James Kerjégu, president of the General Council of Finistère to accommodate his social relations, that is, with its public park, an important monument of Finistère. The castle is both an example of the eclectic style, combining Victorian and Gothic to Breton decor elements, and a prototype of the house equipped with the latest technological advances of the era: lift, central heating, running water, electricity ... Its wrought iron gate, Achilles Busson, was further exposed in 1903 and winning the Grand Palais in Paris before being installed in the castle. Badly damaged in 1944 by an Allied bombing, it has since been bought and developed by the General Council of Finistère. The whole area is registered as historical monuments since June 4, 2009. He has also been awarded the "Heritage of the twentieth century," 3 and the remarkable distinction Garden.

How To Get To Château de Trévarez (Map):