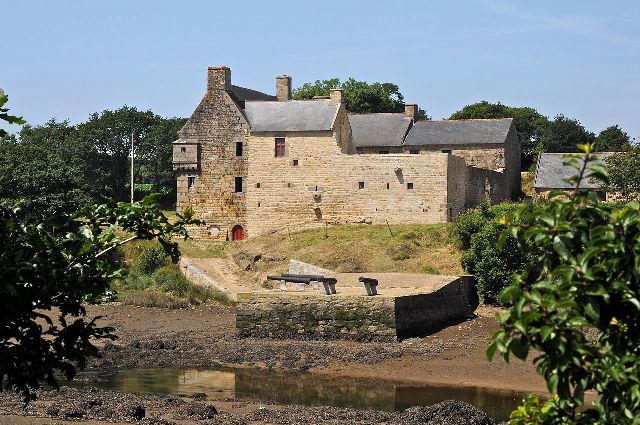 Location: Brélès, in the Finistère departement of France (Bretagne Region).
Built: 15th century.
Condition: In good condition.
Ownership / Access: --
Notes: Manoir de Bel-Air is a mansion has retained many of its original buildings of the sixteenth and seventeenth century, arranged in U a closed courtyard. It is located in the town of Brélès, in the department of Finistère in Brittany. It is the subject of a classification as historical monuments since 9 September 1993.This is the location of Bel Air that some historians place the legendary Castell Meriadec allegedly built by Conan Meriadoc, first king of Britain in the fourth century3. More likely, the mansion replaces an older building in the locality "Kerengar" still attested in 1462, which then owned by Yvon Kerengar. The construction of the current house sprawls from 1585-1599. The location is strategic, wharf and dock provide direct sea access to the mansion cellars. The fortunes of Kerengar was directly related to the commercial and maritime activity on this site. Even today, the quay is defended by four guns placed there since the nineteenth century. "Pray for Francis Kerengar made me do Bel Air and appointed me in 1599," is the motto appearing above the main gate of logis4. The Bel-Air mansion remains in the offspring of Kerengar until 1810, when it passed into the hands of family Claisrambault (oak from a tree ripped from Vert). It was bought in the mid-nineteenth century by Baron Grivel, vice-admiral, a veteran of the campaigns of the First Empire, senator under the Second Empire. At that time, the legend is a stay at Bel-Air Victor Hugo. The manor became the property of the family Taisne Raymonval in 1893. Bel-Air is the subject of major restoration work since the early 2000s (north wing wedge).