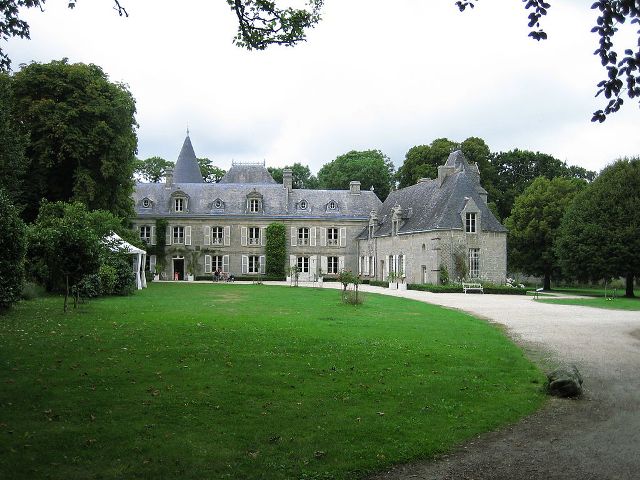 Location: Loctudy, in the Finistère departement of France (Bretagne Region).
Built: Late 16th century.
Condition: Restored.
Ownership / Access: --
Notes: Manoir de Kerazan is located a few kilometers north of Loctudy and south of Pont l'Abbe in Brittany. The mansion is the subject of a registration as a historic monument since August 24, 2000. This applies to the facade and roof of the main building and the wing is what is outside of the Manor. Inside, five rooms on the ground floor are concerned: the dining room, the living room, billiard room, smoking room and library. The park, finally, with its boundary walls and the tank, the tank and the eighteenth-century canal and moats full record. It consists of a main building with a floor and an older wing, remains of the castle of the sixteenth century. The vast park, in English, also has a medieval kitchen garden and how dry moat. The mansion itself has several rooms, richly decorated (many murals). They feature multiple tables from various schools. Include in particular those of Auguste Goy, Quimper painter of the nineteenth century and two paintings by Maurice Denis, leader of the Nabis (Daphnis and Chloe of 1918 and The Pardon of Notre-Dame-de-la-Clarity of 1926). One room is devoted to a collection of Quimper faience whose remarkable cello 1.20m, unique, painted by Alfred Beau. This one was a friend of Joseph Astor, then mayor of Quimper and owner of Kerazan mansion in Loctudy, which buys some of his finest pieces. Joseph-Georges Astor, son of Joseph Astor, strove thereafter to complete the collection of his father's mansion Kerazan has the largest collection of works of Alfred Beau.

How To Get To Manoir de Kerazan (Map):