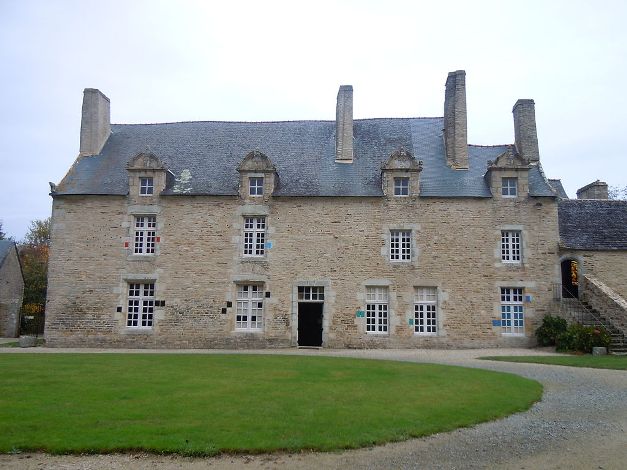 Location: Mellac, in the Finistère departement of France (Bretagne Region).
Built: 1470.
Condition: Restored.
Ownership / Access: --
Notes: Manoir de Kernault is located in the municipality of Mellac, Finistere. It was classified as historical monuments by order of 13 August 1991. The field Kernault today includes a main building that extend a farmhouse and a chapel. A courtyard separates the common home that have above a gallery large attic with wood sides emphasizing the agricultural vocation of the area. Kernault The lords indulged in all likelihood to speculation on grains. The area, which covers several hectares, also includes several wood, a horse paddock, a pool and an orchard. The main building, which has two floors and attic, has a monumental spiral staircase and a stately room in which one can see a fireplace and two imposing medieval tapestry pieces. The arms of the Veer and Lescouët are visible on the skylights of the manor. In the chapel, fragments of stained glass from the old parish church of Mellac, destroyed in 1876, are visible in the canopy. These fragments are represented the coats of arms of the former lords of the parish. We can see the top of the canopy arms of the families of Oboe and Quimerc'h in a necklace of St. Michael and down those families and Lescouët du Tertre.

How To Get To Manoir de Kernault (Map):