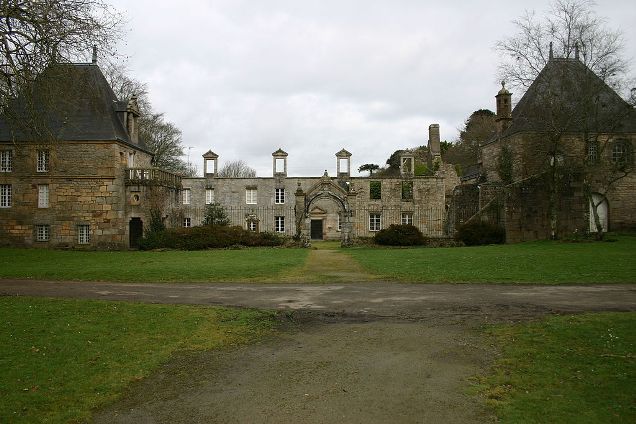 Location: Guilers, in the Finistère departement of France (Bretagne Region).
Built: 16th century.
Condition: Ruined.
Ownership / Access: --
Notes: Manor Keroual is a building of the eighteenth century located in the Finistere in Brittany in the territory of the town of Guilers, specifically in the wood Keroual. Owned by the city of Brest, this space now has an artistic vocation. It hosts in particular since 2002, the Astropolis festival of electronic music. Testimony of prosperous Britain, Keroual manor is a beautiful Renaissance architectural example of the country of Leon. The set consists of a main building accosted a wing ended with one of the two pavilions mark the entry of the property; dovecote forming one end of the garden. Note the presense of a round tower rising left the mansion - a marker initially defensive nature of the building. The building follows the fashion of his time and therefore the rules of Renaissance architecture, which abandons the Gothic - whose influence continues to be felt by the style of some ornamentation - the benefit of the ancient aesthetics - use of Doric columns, pediments ... The materials used are in turn typically Breton: granite, stone and Logonna Kersanton. The mansion remain in a state of ruin until it was purchased in 1967 by architect Albert Brest Cortellari who undertook its restoration. Upon redemption by the city of Brest of the manor, in 198210, the two houses are restored, but only a part of the main building was finally reconstructed, leaving it without a roof, with half of its initial volume space. Manor Keroual is not currently listed building.

How To Get To Manoir de Keroual (Map):