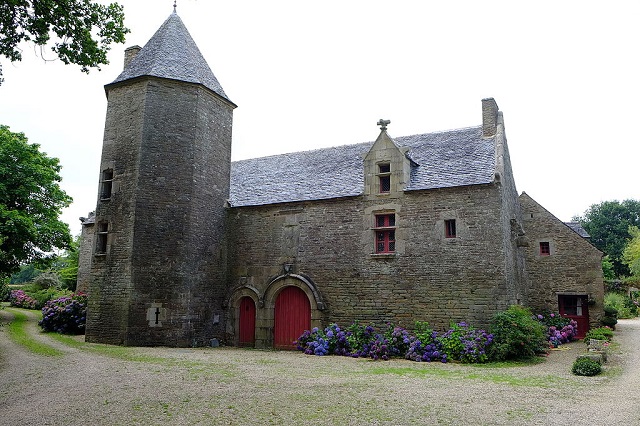 Location: Plougonven, in the Cotes-d-Armor departement of France (bretagne Region).
Built: 15th century.
Condition: --
Ownership / Access: --.
Notes: The manor house of Mézedern is a manor house with a number of remarkable buildings around a quadrangular courtyard, dating mainly from the fifteenth, sixteenth and eighteenth centuries. It is located in the commune of Plougonven, in the department of Finistère, in Brittany. It has been classified as historic monuments since 31 August 1992.The mansion of Mézédern is owned by the Lagadec family, or Lagadeuc, from the fifteenth to the eighteenth century. Even Lagadec is the lord of the place in 1443. His younger brother, Jehan Lagadec is a Breton priest known to be the author of the Catholicon Breton, incunable printed for the first time in 1499 in Tréguier. It is the oldest trilingual dictionary in the world. It is written in Breton, French and Latin and would have been written by its author at the mansion of Mézedern. The Le Rouge family of Guerdavid, already present in the neighboring commune of Lannéanou in the fourteenth century, was certified there from 1732. Then the Raoul families, from Plougonven during the Revolution, Loz de Coatgourhant in the year X, Coudre-Lacoudrais en 1841, Bivillon and Daffniet in 1858 and finally Elléouet3. Mézedern, which threatened to ruin, was saved by its owners who, after classifying the ensemble as historical monuments, were able to undertake restoration work from 1992. The mansion opens its doors every summer for guided tours By the association of the patrimony of Plougonven, and on the occasion of the Journées du Patrimoine. In the summer of 2014, he was celebrated at the manor the 550 years of the writing of the Catholicon4. If there is no proof that the dictionary was written at Mézedern, the author's attachment to these places is certain. He writes in a preamble to his work: "I, Jehan Lagadeuc, from the parish of Ploegonven, in the diocese of Treguier, bachelor of arts and decrees, unworthy as I am, I composed this little work for utility Of the poor little clerics of Brittany, or of the illiterates in Latin. "