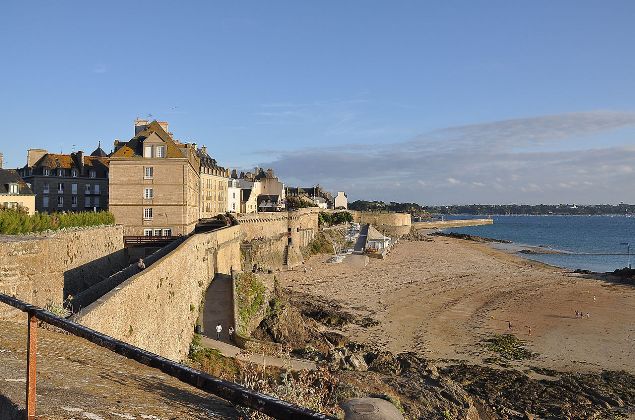 Location: Saint-Malo, in the Ille-et-Vilaine departement of France (Bretagne Region).
Built: 15th century.
Condition: Ruined.
Ownership / Access: Owned by the municipality.
ISMH Reference Number: PA00090801
Notes: Remparts de Saint-Malo are a granite wall that encircles the city, built from the twelfth century by the Bishop of Aleth John of the Grating.The construction of Saint-Malo ramparts began in 1144. Three quarters of the speaker were replaced between 1708 and 1742 by the military engineer Simeon Garangeau, which realizes the extension of the city and the restoration of a significant part its walls to the south and east which allows the interior of the city to move to an area 16 to 24 hectares. The medieval walls of the city, leaving only the Grand 'Porte fifteenth century, part of the Small Walls between the tower Bidouane fifteenth century. A final processing is carried out towards the middle of the nineteenth century between the fort "The Queen" (seventeenth-eighteenth centuries) and "cavalier Champs Vauverts" (sixteenth and seventeenth centuries) . Untouched by American bombing of August 19441, the ramparts of Saint Malo are classified as historic monuments by order of 12 July 18864. Saint-Malo's ramparts represent Britain in issuing Stéphane Bern, favorite monument of French on France for the 2015 season.

How To Get To Remparts de Saint-Malo (Map):