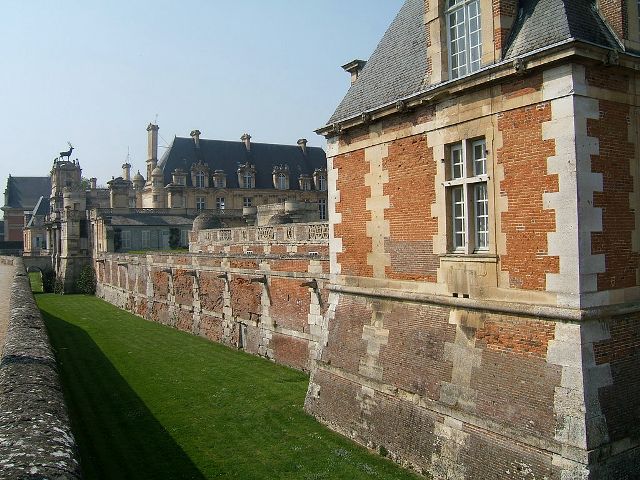 Location: Anet, in the Eure-et-Loir departement of France (Centre Region).
Built: 16th century.
Condition: In good condition.
Ownership / Access: Privately owned.
ISMH Reference Number: PA00096955
Notes: Château d'Anet is a Renaissance castle, located in Eure-et-Loir, which was sponsored by Henri II for Diane de Poitiers.The castle was built under the direction of Philibert Delorme (architect), Jean Goujon (sculptor) and Jean Cousin (painter). One remains today its plan quadrilateral (called "U" or "horseshoe") from the left, changed in the middle of the seventeenth century, the 1804 recipient who detonated the mine body central and right in équerre. An annotated drawings of Primaticcio annet (Phaedra and Hippolytus, Louvre), is probably a project for the windows ordered the master glazier Nicolas Beaurain in 1548. At Anet, the style of Primaticcio was also visible in promising angels instruments of the Passion carved reliefs in the vault of the chapel (in situ) and in the group of the huntress Diana surmounting one of the fountains (now in the Louvre). In July 1547, shortly after the death of Francis I, the painter Leonard Limosin delivered to Saint-Germain-en-Laye twelve apostles painted enamel after color cartons Michel Rochetel themselves made from drawings of Primatice (draped Study for St. Paul and draped Study for St. Thomas). According to Francis wishes, whose enamel plates bearing the "F", the Twelve Apostles should have twelve pilasters decorate the chapel Saint-Saturnin Castle Fontainebleau. The new king, Henry II, decided otherwise and had them place from 1552 in the chapel woodwork Anet. They are now at the Museum of Fine Arts in Chartres. Their cardboard served for the realization of a second rather than the figure of Francis series but that of Henry II (Louvre Museum). Some fragments of architecture and sculpture were purchased from demolition by Alexandre Lenoir, who had them transported to Paris to feed the museum of French monuments (then located in the current School of Fine Arts). Especially the portico of the central main building decorated with the figure of Diana, the group of a stag and four dogs occupied the courtyard of Fine Arts before being moved back to Anet. This ornament was originally a PLC: deer shook his head and dogs wag their left hind foot to mark the hours; the current group is a reproduction, the original having been melted during the Revolution. The chapel was restored from 1844 to 1851 by the architect Auguste Caristie, and a portico came dressed facade formerly masked by a wing (gallery).

How To Get To Château d'Anet (Map):