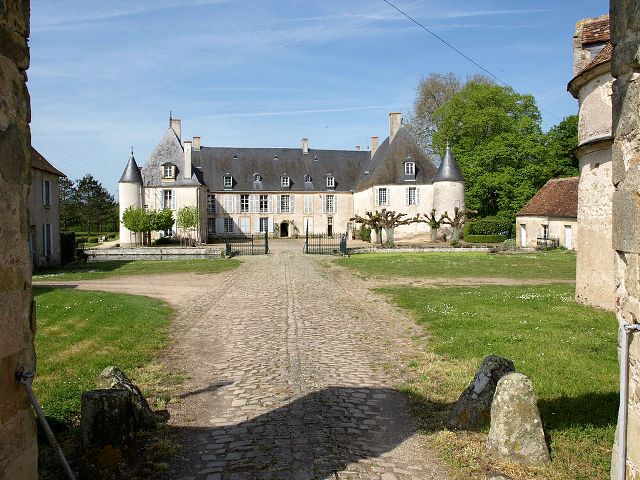 Location: Méreau,in the Cher departement of France (Centre Region).
Built: 1380.
Condition: In good condition.
Ownership / Access: Owned by a Private company.
ISMH Reference Number: PA00096846
Notes: Château d'Autry is located on the outskirts of Vierzon in the town of Méreau in the Cher department. It includes several buildings, some of which are now listed as historical monuments.The covenant Robert Etampes, Sieur de Salbris Valencay and Ardre Loup, contracted in 1448 with a young lady of the country of Marguerite de Lury Beauvilliers, brought him into the house of Etampes earth Autry, for stay close to four hundred years.Autry was then all that is the feudal manor of the fourteenth century; an enclosure ditches for his defense; royalties in kind ninety fowls; a dovecote; warren, a river and a pond to feed the Lord's table; fat pasture on the banks of the Arnon for guests stables and barns; a large supply of wood for the pyre and distraction of the master, who could hunt deer and wild boar. Mr. Bengy cites among the ancient castles "destroyed during the wars with the kings of England, or during civil discord and since have been restored in a modern type and form of beautiful homes," the Autry then owned Mr. Dupre de Saint-Maur. It should be noted, however, that other castle cited by the author, such as Quincy, Foëcy-Laloë Barmont were rebuilt from the ground up, while for Autry, parts of the old mansion were used, including turrets who under Louis XIII and Louis XIV had their time and were abandoned by architects, have been preserved and obviously back to an earlier period than the rest of the building.

How To Get To Château d'Autry (Map):