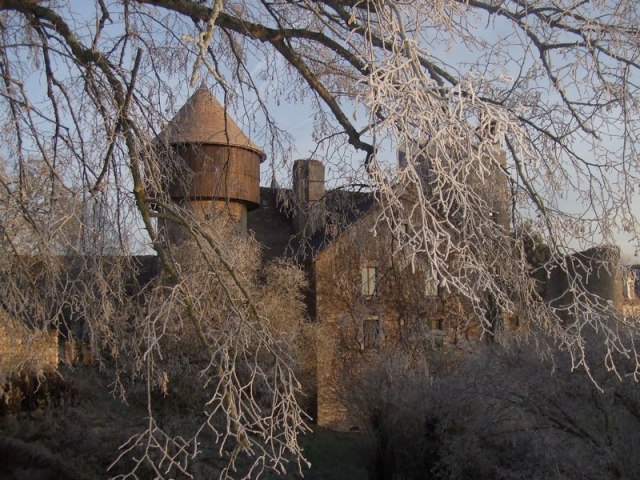 Location: Ingrandes, in the Indre departement of France (Centre Region).
Built: 11th century.
Condition: Ruined.
Ownership / Access: Privately owned.
ISMH Reference Number: PA00097355
Notes: Château d'Ingrandes is located in the town of Ingrandes (Indre) 7 km west of White. It is the subject of a registration as a historic monument since 1 October 1987.Defended by the steep valley of the Anglin south, and by deep ditches (missing) to the north, the castle was built in the eleventh century. It was built on the site of a Roman castrum, commander of the Roman road from Bourges to Poitiers which found trace on the table Peutinger. Duguesclin, from Sainte-Severe Poitiers followed the banks of the Anglin, hastily taking the fortresses lining the invaders. The country was English at that time, part of the fief of Eleanor of Aquitaine. The castle was then rebuilt in the fourteenth century and fifteenth century. The remains we remain today. The framework of the tower hoardings was dated 1465. Henry, during his wars against the league, conquered the castle and gave it to the lord of the White Antoine Aloigny in gratitude for his help. The towers in pepper dungeon and enclosure were there appears truncated under Decrees of 1626 ordering the destruction of the military strongholds of the kingdom. Marie-Henriette Aloigny, quoted by Saint-Simon as a scheming, was exiled to the court of Versailles and lived in the castle of Ingrandes where she built the house seventeenth century and the village church (1698). After the sale in 1734 following the financial collapse of its owner, the farmer-general Claude Dupin, grandfather of George Sand (Aurore Dupin born), became, in 1739, acquired all of the castles Marquisat Blanc (Roches, Forges, Ingrandes, etc.). The circumstances of the destruction of the main building are unclear: it could date back to the late eighteenth century. Castle Ingrandes remained the property of the descendants Dupin, the baron of Villeneuve until the beginning of this century. In 1923, he then became the property of the family that Combescure exploited as farm until the 1970s. Alain and Jacqueline Drouart are acquiring the ruins of the castle of Ingrandes in 1982. A protection application package is submitted. The castle is listed in the inventory of Historical Monuments by prefectural 1 October 1987. To date, the home of the fifteenth century is completely restored, the keep is saved and the work continues. In 2005, a hoarding was rebuilt on the speaker towers. On 17 April 2008, a new roof is placed on the stair tower.

How To Get To Château d'Ingrandes (Map):