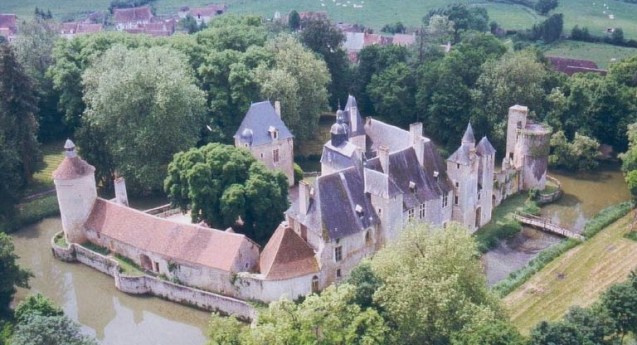 Location: Bannegon, in the Cher departement of France (Centre Region).
Built: 12th century.
Condition: In good condition.
Ownership / Access: Privately owned.
ISMH Reference Number: PA00096647
Notes: Château de Bannegon is a castle located in the town of Bannegon, in the department of Cher in France.Situé the Berry and Bourbonnais border, the castle of Bannegon is a historical monument since 1936. It has an imposing tower bridge -Lévis, and a trapezoidal walled area along the river Auron. The great tower, known as bars, dates from the fourteenth or thirteenth start and has a fireplace 9.5 m hauteur.Le castle belonged to the families of the Gate (around 1000) and Bars (1383). The original castle dates from the twelfth century. Bussy-Rabutin was busy to the king in 1552. Partially destroyed in the sixteenth century, it was supplemented by an early Renaissance style building body. Having taken the Reform party, Mary Brabançois then lady Bannegon, took up the defense of the castle during a siege of fifteen days, held by the governor of Bourbonnais, M. montare. Restored in the late nineteenth century, it has retained a medieval aspect. The castle, for facades, roofs, and covers the subject of a classification as historical monuments since September 30, 1965. The current owners inherited the castle in 1988 and created an association (Bannegon Millennium) whose mission is to restore the castle. In 1996, they created the "Medieval Bannegon" held each year by the end of next week of 15 August. All profits will be paid to the association for the protection of the castle.

How To Get To Château de Bannegon (Map):