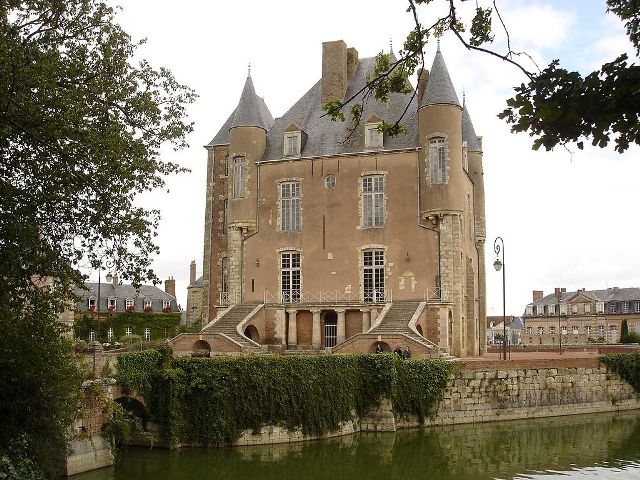 Location: Bellegarde, in the Loiret departement of France (Centre Region).
Built: 14th century.
Condition: In good condition.
Ownership / Access: Privately owned.
ISMH Reference Number: PA00098709
Notes: Château de Bellegarde, also called castle of the Hospital, is a French castle located in the town of Bellegarde, in the department of Loiret and the region Centre-Val de Loire.In the nineteenth century, between 1355 and 1376, Nicolas Braque had built the current castle keep, on a square with four turrets encorbellement. The foundations of the keep however seem to go back to the twelfth century, three elements of arcade evidenced (ground floor) . The castle of the changing face Hospital under Henri IV and Louis XIII, by the action of the Jacques Hospital (1578-1635), the last count and first Marquis of Choisy-aux-Loges. At that time Claude Chastillon draws the castle and Dom Morin décrit.Jacques the Hospital of the fact in particular add to the west keep the flag of waves containing a staircase in wrought iron railing. In the High Court or Court of Honour (current court Antin), we find the master tower, built by Jacques de l'Hospital, sheltering initially a dovecote. It is then drawn by Chatillon (1564-1606). Then, under Louis XV, it is converted into a house by Gautier, Sieur de Besigny penultimate Marquis de Bellegarde. The origin of its name is in this last story: Gauthier Bésigny would have installed in this building superintendent, was then called capitaine4. In the course of the seventeenth century, the latest Hospital edify, at an unknown date, the barns of the lower court, the doors of radiating bricks remain. In 1692, the Duke of Antin bought the castle of Bellegarde. From 1717 he made two rewrite the course of the castle to develop in the farmyard stables, and in the high court's personal apartments. It starts with the flag of Antin (currently housing the café of the castle and the collection of sculptures Charles Desvergnes), then add the flag is the salamander (current town hall), the kitchens, the flag of the Superintendency (named in honor the Duke, superintendent of the royal buildings). He also convert the dungeon, piercing including high windows (we still see today the trace of the old openings). In 1782, Gilbert Neighbours, President of the Parliament of Paris, last Marquis de Bellegarde, built by Viel, the current staircase of the south face, with columns in the Greek Revival style. The gate of the court of Antin bearing the monogram of Durand-Pingot replaced in 1836 that of the Duke d'Antin removed by the Allies in 1815.