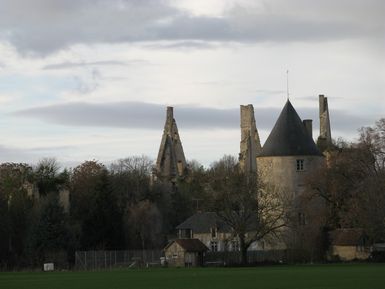 Location: Vorly, in the Cher departement of France (Centre Region).
Built: 14th-15th century.
Condition: In good condition.
Ownership / Access: Privately owned.
ISMH Reference Number: PA00096934
Notes: Château de Bois-Sire-Amé is a French castle ruins, located in the municipality of Vorly in the department of Cher, Berry.Royal Residence situated near the forest, not far from an old feudal mound dating from the eleventh century, the present castle of Bois-Sir-Ame, also called Bois-Trousseau, was built to the very end of the fourteenth century to the beginning the fifteenth century, from the time when Charles VI in July 1396 gave the right to a local lord, who made his fortune in trade sheets, a man named Jacquelin Trousseau, set in place a powerful fortress. Jacquelin Trousseau, son of Artault Trousseau, Viscount of Bourges, who took to wife, in June 1447, Perrette, only daughter of Jacques Heart, bagman of King Charles VII in the presence of it. The high dowry Perrette served in part to enhance and improve the castle in the Gothic style. This "country palace" of considerable size, is a harbinger of the future of the Loire castles. Charles VII, whose aversion for cities is marked, particularly fond of this country residence: it stays there regularly, it gives many prestigious festivals and celebrations and receives numerous ambassadors. This sovereign, who considered this residence a little like his bachelor, had found there Agnès Sorel, his mistress and conseillère1. He financed the additional work, the costs were managed by Jacques Flower. Francis stayed there in July 1524 and was the author of a famous quatrain referring to the "Queen of Beauty" in these places. Vauban is his last great known owner. The castle is now deteriorating rapidly and the Cher could to acquire.