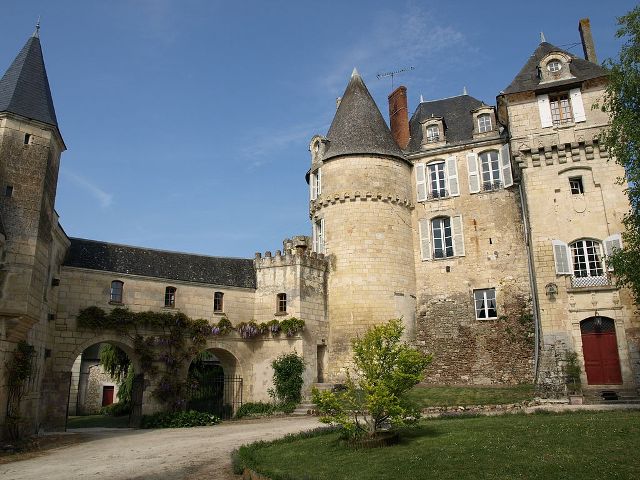 Location: Celle-Guenand, in the Indre-et-Loire departement of France (Centre Region).
Built: 14th century.
Condition: In good condition.
Ownership / Access: Privately owned.
ISMH Reference Number: PA00097617
Notes: Château de La Celle-Guenand of La Celle-Guenand, located in Indre-et-Loire, was built in the fifteenth century. The castle is the subject of a registration as a historic monument since June 11, 1943.During the Middle Ages, there are two castellanies: Celle-Draon and Celle-Guenand. From this time remains the underground refuges located beneath the current castle. The two fiefs are grouped at the end of the Middle Ages by the lords of She Draon. The start of construction of the building itself dates from the fifteenth century, with the tower-gate and gatehouse, which continues to progressively centuries by buildings, repairs, and successive extensions. At the foot of the central staircase, is the entrance of the underground shelters that served during the wars of religion, but also during the Second World War. To the right are gardens and vegetable gardens. In terms of military architecture, we find the remains of a drawbridge on the square tower of the castle, a portcullis at the gatehouse, loopholes and guns mainly on the primitive access square tower at the castle.

How To Get To Château de La Celle-Guenand (Map):