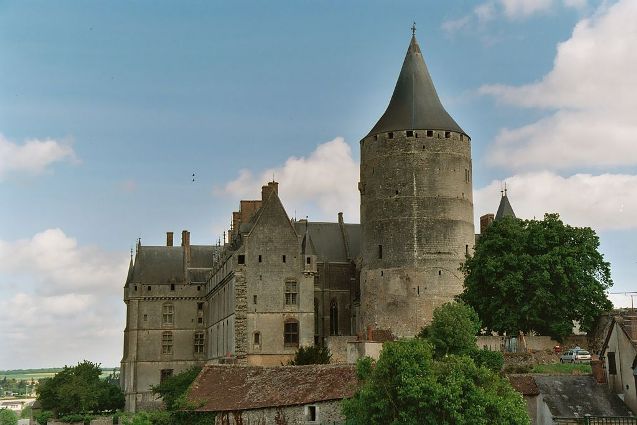 Location: Châteaudun, in the Eure-et-Loir departement of France (Centre Region).
Built: 1171.
Condition: In good condition.
Ownership / Access: State property.
ISMH Reference Number: PA00097021
Notes: Château de Châteaudun is a castle built between the twelfth century and the fifteenth and sixteenth centuries and which is located on a rocky outcrop overlooking the city of Chartres and the Loir, in the Eure-et-Loir department in France. The dungeon, the oldest building was built around 1180 by Thibaut V, Count of Blois. Jean de Dunois (1402-1468), bastard of Louis I, Duke of Orléans and companion of Joan of Arc who had received the castle as a reward for the release of his half-brother Charles of Orleans, prisoner of the English, turns it into residence by adding a Gothic-style main building and chapel. A second renaissance wing was added in the seventeenth century. The castle, which is perfectly preserved, is managed by the Centre of national monuments and protected as historical monuments.I Thibaud the Cheat, Count of Blois in the early tenth century, established one of its strongest fortresses in the era of invasions vikings2. The Comte de Blois Thibaut V built the dungeon to 1180. On 13 October 1391, Guy II of Châtillon, last count of Blois, sells the counties of Blois and Dunois to Louis d'Orleans, brother of King Charles VI. In 1407, after the assassination of Louis d'Orleans, Chartres and its other good passes to his son Charles of Orleans. Charles VI donated the castle in 1439 with his half-brother Jean de Dunois said "the Bastard of Orleans" or "Dunois", companion in arms of Joan of Arc. In 1452 it began the construction of the chapel and the body of Gothic house. His work was continued by his descendants the Dukes of Longueville that build the Renaissance wing from 1510. When the Longueville family goes out without descendants in 1694, the castle returns to the Dukes of Luynes. The half castle abandoned by its owners is a refuge for the inhabitants of Chateaudun after the fire that ravaged the city in 1723. During the French Revolution, the chapel was ransacked and buildings used as barracks. The castle is again damaged by the Prussians during the Battle of Châteaudun in 1870. In 1938 the castle was acquired by the state that began its restoration.The castle superimposed harmoniously military architecture of the Middle Ages and the Renaissance and Gothic styles.

How To Get To Château de Châteaudun(Map):