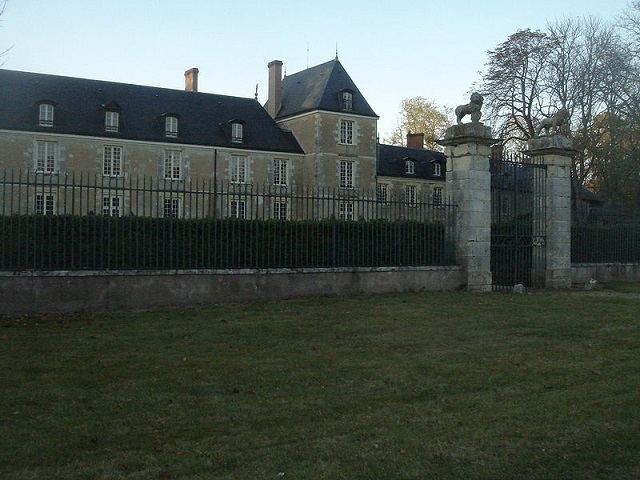 Location: Saint-Denis-de-l'Hôtel, in the Loiret departement of France (Centre Region).
Built: 16th century.
Condition: In good condition.
Ownership / Access: --
Notes: Château de Chenailles is a French castle in Saint-Denis-de-Hotel, in the Loiret region in Central Loire Valley.Geoffroy Valley I bought several owners in the sixteenth century farmhouse located on the field and took the title of Lord of Chenailles. Geoffroy I died in 1537, his eldest son, Geoffrey Valley II inherits the area. Geoffroy II is condemned for heresy and executed by hanging on the Paris to Strike in 1574. The estate passed to his brother Jacques Vallée, general superintendent of finances under the reign of King Henry of France III. Marie Vallée, sister of Geoffrey and Jacques and wife of Robert Miron, Comptroller General of Finance and steward orders of the King of France, became the owner of the domain. The couple began building a castle on the field. On the death of Mary in 1615, the castle passed to his sister Claude Vallée and the death of Claude, in 1624, the castle passed his nephew François Vallée, Lord Laubinière and president-treasurer at the Paris financial office , Comptroller General of wars and butler of King Louis XIII of France. The nephew of François Vallée, Jacques Vallée Des Bars, Treasurer General of France, was during this period, a frequent visitor to Chenailles6. At the death of Francois, the castle returns to Claude Vallée, parliamentary counselor, arrested for conspiracy and imprisoned in the Bastille in 1656. On May 12, 1693, Claude donated the castle to Jacques Festival, regular commissary, making his donation tower, May 23, 1696 to Louis Festival Noisy, grand master of the waters and forest Orléans7. January 8, 1719, Louis Noisy party sells the castle to Constance Eleanor of Estrées married to Sieur Lorent, Count of Ampus.

How To Get To Château de Chenailles (Map):