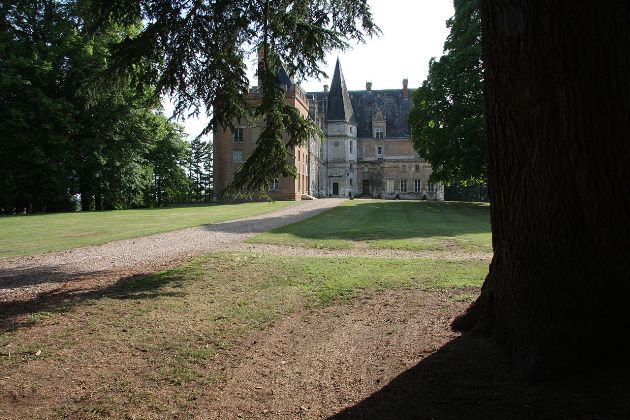 Location: Courtalain, in the Eure-et-Loir departement of France (Centre Region).
Built: 15th century.
Condition: In good condition.
Ownership / Access: Owned by a Private company.
ISMH Reference Number: PA00097086
Notes: Château de Courtalain is a French castle of the fifteenth century Courtalain located on the border of the Perche and Dunois, near the Regional Natural Park of Perche.The castle was built in 1483 by William of Avaugour, married to Perette of Baif, aunt of Jean-Antoine de Baïf, poet and friend of Ronsard and member of the Pleiades.The tomb of Perette Baif is in the church of Courtalain. In the seventeenth century, the castle came into the house of Montmorency by the marriage of Jacqueline dAvaugour with Peter II of Montmorency. Nine generations of Montmorency have succeeded in Courtalain. Courtalain entered in 1862 in the home of Gontaut-Biron by the marriage of the niece of the last Duke of Montmorency with the young Louis de Gontaut Biron. Today the castle is inhabited by the direct descendants of the Marquis de Gontaut Biron Anne and her son Charles de Gontaut Biron, whose wife Marie de Roussy de Sales. Courtalain is a living castle where several types of architecture overlap, Renaissance, Gothic and English eighteenth century. A beautiful English garden is the setting for these imposing buildings. The castle and its outbuildings are registered as historical monuments.

How To Get To Château de Courtalain(Map):