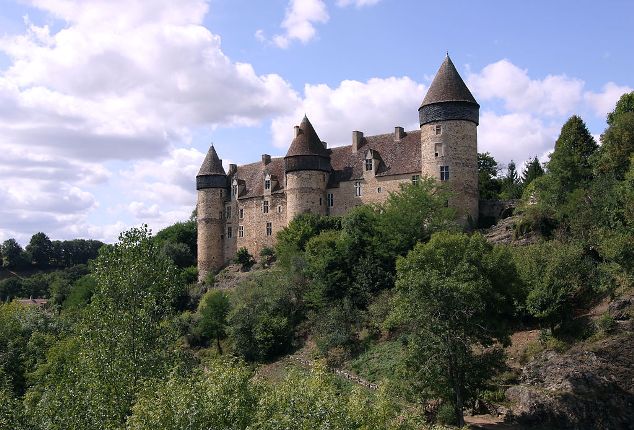 Location: Culan, in the Cher departement of France (Centre Region).
Built: 12th century.
Condition: In good condition.
Ownership / Access: Privately owned.
ISMH Reference Number: PA00096783
Notes: Château de Culan is a medieval fortress located in the municipality of Culan in the Cher and the region Centre-Val de Loire.The castle, registered in the early twentieth century on the list of Historical Monuments and classified (walls and roofs) in 1956, had a troubled history. Built on a rocky outcrop overlooking the river and the Arnon Valley (natural site), a first wooden building - which nothing remains - was demolished in the tenth century. A second building was besieged and destroyed by Philippe Auguste (in 1188) during movements of wars. The present castle began to be built at the end of the twelfth century, the beginning of the thirteenth century, and construction continued until the fifteenth century, with rare additions to the Renaissance (mullioned windows). When the sling (in 1651), the castle lose by order of Mazarin, the top of its tower, part of its walls and gatehouse. He has belonged to Admiral Culant (1360-1444), Maximilien de Bethune, Duke of Sully (1599-1621) and the Prince of Conde. In 1663, the Prince de Conti sells land to Michel Le Tellier Chaville, Marquis de Barbezieux, whose family remains the owner until the Révolution. During the Revolution, the castle grounds were divided between several families and the fortress was sold as national property. Facade and roof were recorded March 2, 1926 and classified historic monument 2 June 1956. He has received many famous guests: Joan of Arc, Louis XI, Sully, Madame de Sevigne, the novelist George Sand, "the good lady of Nohant" came in next with Chopin, or Ernest Renan. General de Gaulle, on a visit to Saint-Amand-Montrond after war, preferred to spend the night in a private house in the street of the Church.

How To Get To Château de Culan (Map):