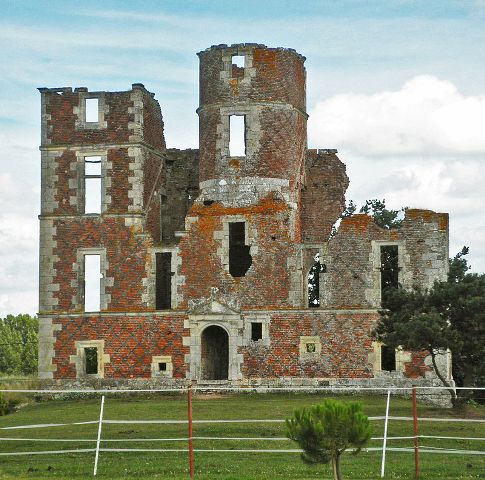 Location: Saint-Denis-en-Val, in the Loiret departement of France (Centre Region).
Built: 16th century.
Condition: Ruined.
Ownership / Access: Privately owned.
ISMH Reference Number: PA00099004
Notes: Château de l'Isle is a ruined castle located in Saint-Denis-en-Val on the south bank of the Loire, in the Loiret department. The castle is listed as a historic monument since 1925 and is located within the perimeter of the natural region of Val de Loire World Heritage of the United Nations Educational, Scientific and Cultural Organization (Unesco) . In the sixteenth century, the castle of the Isle is the lordship of Groslot, a rich family of tanners Orléans. It is the counterpart of the Groslot hotel built at the same time in the city center of Orleans. It represents one of the high place of Orléans Protestantism during the wars of religion, before being destroyed by a flood of the Loire.Construction of the castle began in 1530 at the initiative of the bailiff Jacques Groslot Orleans, Marguerite de Navarre Chancellor and owner of the Bumblebee Island, a land isolated by water only during flooding and located in the enclave parish Chécy. In 1535 Groslot sees authorized by King Francis I of France to build a bridge levis. Jacques Groslot Orleans resigned his bailiff duties in 1545, seven years before his death; they were hereditary Jerome and his son succeeded him. The latter, Calvinist, took a secondary but active part in the struggle for the triumph of the Protestant Reformation. He opened his castle including his co-religionists to supplement their démolis5 temples. In 1560, Conde arrested with Jerome is saved by the death of Francis II in the Groslot hotel. He takes refuge in the castle of the Isle. Orleans was occupied by the Protestant armies in 1562 and 1567. In 1570, deposed and convicted for the crime of treason, Jerome Groslot was finally pardoned in 1571 in favor of the Peace of Saint-Germain-en-Laye, then authorized by Charles IX to hold a sermon in his castle of Isle. However he died in Paris in 1572 in the massacre of St. Bartholomew. Huguenots were massacred in the castle of the Isle and the Orléans Protestantism décimé7. In 1620, from 24 to 28 April, a Protestant theological debate on grace, stood with them, for participants, Daniel Tilenus, John Cameron, Theophile Brachet La Milletière and Louis Cappel. In 1751, the field out of the properties of Groslot and their descendants. In 1794, Jacques de Mainville, negotiating with Indian fabrics, became the owner. In 1829, the area of ​​Isle owned Louët of Terrouenne, Mayor of Saint-Denis-en-Val, is partly linked to this county. In September 1866, the waters of the Loire in flood do give lifted 150 meters from the castle, already in poor condition, then in large part détruit. June 30, 1925, Castle Isle is registered in the inventory of historiques Monuments. After a long period of neglect during which the remains are badly damaged, the backup association Isle Castle founded in 2008 takes action to ensure the survival of the monument thanks to stabilization works and preservation ruins. The association bought the castle 31 March 2010.