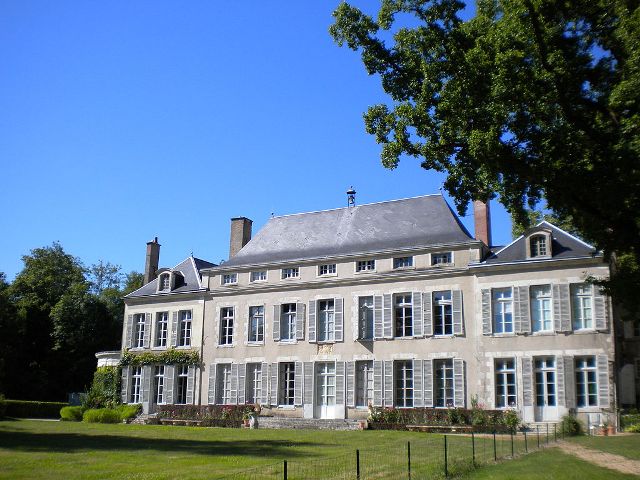 Location: Olivet, in the Loiret departement of France (Centre Region).
Built: 17th century.
Condition: In good condition.
Ownership / Access: Privately owned.
Notes: The Château de La Fontaine is a French castle on the territory of the town of Olivet in the natural region of the Loire Valley, the department of Loiret and the region Centre-Val de Loire.From the sixteenth century, the banks of the Loiret were occupied by religious orders, who built the levees and mills. The nuns of the priory of the Madeleine had much of the land now occupied by the La Fontaine park, as well as two neighboring mills, Bechets and Saint-Julien. In the tenth century, they built a small chapel dedicated to Saint Julien poor, patron saint of fresh water boatmen. Pilgrims flocked, attracted by a source close to the oratory, called the fountain of Saint-Julien, who was known to cure scabies. If it is the same source, this is the first mention of the source who later gave its name to La Fontaine. In the late sixteenth century the rampages Protestants during the religious wars impoverished the religious communities in the Loiret, which had to sell some of their land. Thus, a farmer, Martin Courtigier, acquired in 1575 an agricultural land of four acres (two hectares) in a place called the Fountain of Saint Julien. He built a farm on the site of the current orangery. Ownership then passed from hand to hand. Claude Le Semelier, alderman of Orleans, built at the location of the current joint house vineyards - equivalent of a country house - three bedrooms. In 1638, Leonor of Raganne purchased the property of La Fontaine and expanded to 200 acres (100 hectares). He built the central part of the castle and the orangery. He laid a French park with roundabouts star. Tradition has it that Le Nôtre has designed the park plan, like that of other properties along the Loiret, including the Source park. Ownership then passed to Francis Le Rebours, provost of Orleans and the Marquise de Maupas. In 1754, it sold the property to Mrs. Pinchinat, nicknamed the beautiful Mrs. Pinchinat, whose portrait in pastel by Perroneau appears in Museum of Fine Arts Orleans. Ms. Pinchinat built the two side pavilions of the castle. During the Revolution, the church property was confiscated and sold. Thus the Magdalen religious lost the benefit of Ms. Pinchinat the two neighboring mills, Bechets and Saint-Julien and the floor of Bechets.