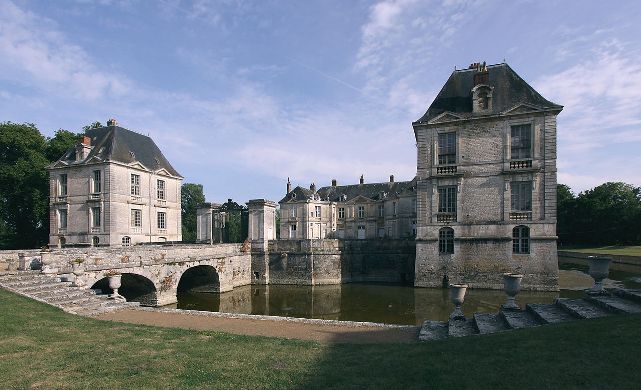 Location: Lignières,in the Cher departement of France (Centre Region).
Built: 17th century.
Condition: In good condition.
Ownership / Access: Privately owned.
ISMH Reference Number: PA00096826
Notes: Château de Lignières is a castle, located in the municipality of Lignières (Cher), in the department of Cher in France. The current castle of Lignières, a listed building (Order of 27 June 1935) with its dependencies, the courtyard, the moat, the buildings of the common and the park was built between 1654 and 1660 to the location of old castle belonging to La Rochefoucauld, François Le Vau, brother of Louis Le Vau, to the New Jerome initiative, General Superintendent of Posts and Relays of France, who had acquired the site in 1653. Sainte Jeanne de France, daughter of Louis XI, lived 15 years in Lignières. Castle Lignières is the headquarters of the Association François Le Vau in Lignières, who work according to its statutes, for the promotion and restoration of locations1. The decrepit however threatening ruin of the place is increasingly worrying and never raised any investment of the owner, nor even the slightest maintenance summary. The architects of the Buildings of France and local authorities seem to desinterresser this issue and this good is henceforth closed to the public.