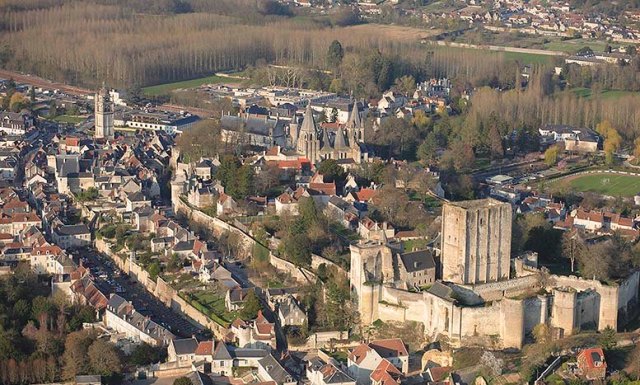 Location: Loches, in the Indre-et-Loire departement of France (Centre Region).
Built: 11th century.
Condition: In good condition.
Ownership / Access: Owned by the department.
ISMH Reference Number: PA00097821
Notes: Château de Loches is a castle from the first half of the eleventh century, which stands in the Loire Valley, the town of Loches in the Indre-et-Loire department in central France, Loire Valley, the heart of the Royal City. This city includes, besides the keep, the royal residence and the Cathedral Saint-Ours. Under the historical monument; the castle is the subject of classification by the 1862 list; the door of the castle is the subject of a classification by order of 12 July 1886; the former Royal Palace (Royal House) is the subject of a 1889 list by ranking; Northwest casing part overlooking the Rue des Fosses-Saint-Ours and connecting the main gate of the castle at the base of the royal residence in the North is the subject of a registration by order of 8 August 1962.Although traces of the Roman occupation are attested around Loches, there is no vestige prior to the square tower of the tenth century. The first trace of a castle on the current location is indicated by Ursus Cahors in 491, that evokes a castrum, it was presumably a fortified camp with a dungeon bois. Saint-Ours built a mill near the monastery and lived there until his death in 508. In 742, the place is taken by the forces of Pepin and Charlemagne, who suppress the revolt Hunald, Duke of Aquitaine. The castle was completely destroyed.

How To Get To Château de Loches (Map):