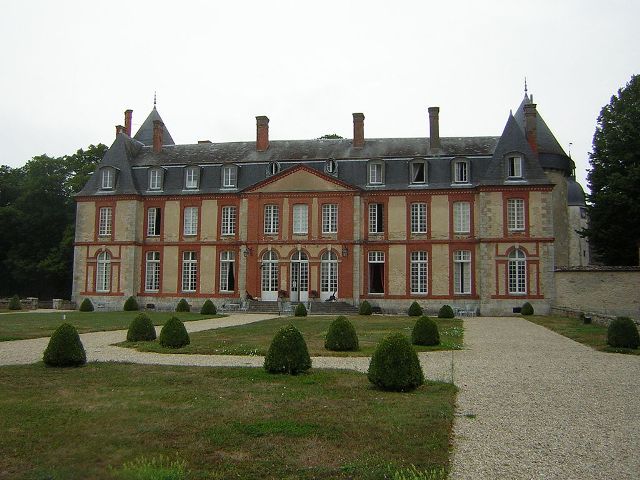 Location: Le Malesherbois, in the Loiret departement of France (Centre Region).
Built: 14th century.
Condition: In good condition.
Ownership / Access: Private property.
ISMH Reference Number: PA00098810
Notes: Château de Malesherbes is a French castle in Malesherbes, in the department of Loiret and the region Centre-Val de Loire.A first castle is attested, the castle of Bois-Malesherbes, acquired in 1398 by Jean de Montaigu, superintendent of finance of Charles VI. It then passes into the hands of the Norman family Graville and the Balzac Entragues. He was brought as a dowry by Anne Graville, daughter of Admiral Louis Malet Graville his cousin Pierre de Balzac Entragues. François Balzac Entragues wife Marie Touchet (mistress of the late King Charles IX) in 1578 giving birth to Catherine Henriette de Balzac d'Entragues which will become the mistress of Henri IV and extorts a promise of marriage written on 1 October 1599 at Malesherbes Castle. But King quickly forget that promise. Deceived Catherine Henriette participating in a conspiracy with his father to carry the son she had from the king, Henri, Duke of Verneuil, on the throne. François Balzac Entragues stopped in his castle, sentenced to death and then pardoned and finally placed under house Malesherbes. The castle then passed to the branch of Balzac Illiers. Henri, Duke of Verneuil become bishop of Metz.In 1718, the castle was sold in a state of great disrepair, with Guillaume de Lamoignon de Blancmesnil, General Counsel to the Parliament of Paris. Under the direction of architect Pierre Vigny, the new owner is bridging gaps and building a classical façade, while retaining the corner towers. It is in this castle that his son, Guillaume-Chrétien de Lamoignon de Malesherbes was banished when Maupeou government (1771-1774). Botany fan, he devoted considerable time to its plantations. Thomas Jefferson also said about him that he was the man from France who is most familiar trees and Arthur Young notes in his travels: "A league before arriving at Malesherbes, begins a beautiful row of trees on both sides of the highway: it is the work of Malesherbes, and it is a striking example of his attention to adorn an open country . During a period of more than two miles, are mulberry; they join its other beautiful plantations in Malesherbes, which contain a wide variety of the most curious tree that was ever introduced in France ". Guillaume-Chrétien de Lamoignon de Malesherbes has been one of the defenders of Louis XVI before the Revolutionary Tribunal, the castle became at that time a place of pilgrimage for royalists eager to collect his mouth memories of the monarch. In December 1793, a search is conducted in the castle and the family members were taken to Paris where they will be guillotined. The estate then passed to orphans and Christian Louis, François-René de Chateaubriand nephews and great grand son of Malesherbes. The castle is experiencing a great animation during the Restoration. Louis de Chateaubriand was very close with his country neighbor great lawyer Berryer. From the late 1990s to 2007, the castle was operated by a hotel chain. Since 2007 he is the property of an individual.

How To Get To Château de Malesherbes (Map):