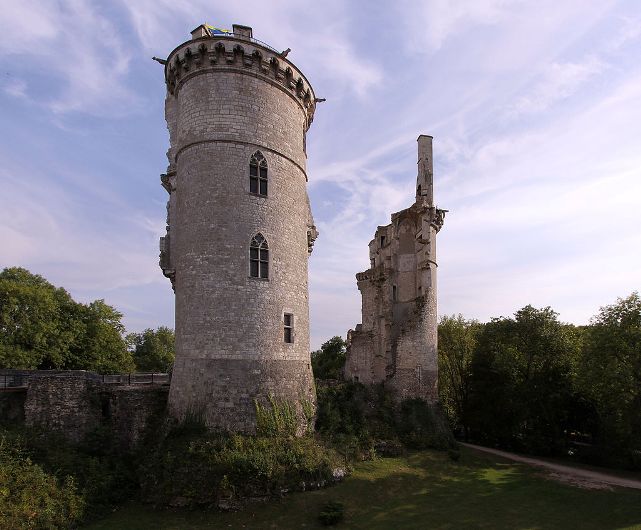 Location: Mehun-sur-Yèvre,in the Cher departement of France (Centre Region).
Built: 1367.
Condition: Ruined.
Ownership / Access: Owned by the municipality.
ISMH Reference Number: PA00096837
Notes: Château de Mehun-sur-Yèvre is an ancient medieval fortress in the town of Mehun-sur-Yèvre, Cher, Region Centre, formerly in the duchy of Berry. Now in ruins, is located on a rocky hill overlooking the confluence of Yèvre and Annain.The existence of a defensive castle in Mehun-sur-Yèvre probably goes back to the ninth century, it belonged to the family of Courtenay in the twelfth century, before moving to the house of Artois and finally returns to the royal family of Valois. The castle had its heyday in the Middle Ages to the fourteenth century and fifteenth century but was soon abandoned by the Kings after the reign of Charles VII. The eighteenth century marked the death knell with the dismantling of the castle transformed into a stone quarry. The transmission of the castle lord Lord was not made by weapons but by marriage. These peaceful reversals allowed the enrichment and beautification of the castle through the centuries.