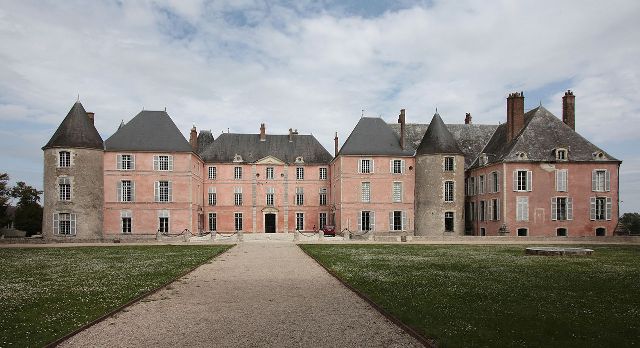 Location: Meung-sur-Loire, in the Loiret departement of France (Centre Region).
Built: 12th century.
Condition: In good condition.
Ownership / Access: Bishop of Orleans.
ISMH Reference Number: PA00098818
Notes: Château de Meung-sur-Loire is an old fortified residence at Meung-sur-Loire, in the department of Loiret and the region Centre-Loire Valley, France. It is built from the twelfth century and is in turn of residence of the Bishops of Orleans and in prison, François Villon was the most famous captive. The castle and park are classified as historic monuments since 1988.The building is located within the perimeter of the Val de Loire World Heritage of UNESCO.A first castle to serve as a residence for bishops of Orleans, is built in the middle of the twelfth century on the site of a monastery built against the Saint-Liphard collegiate. It remains today the recessed towers flanking the church tower, called "Manasses towers of Garland" (Bishop of Orleans 1146-1185). From 1209 begins the construction of a new episcopal palace, more importantly, about fifty meters from the former which is then transformed into prison. During the Hundred Years War, the castle became an English fortress, commanded by John Talbot and Thomas Scales, which will be taken by Joan of Arc and the Duke John II of Alençon June 14, 1429 during the Battle of Meung-sur-Loire. The poet Francois Villon was locked in the prison of Meung Castle in 1461 by order of the bishop Orléans. Around 1500, a main building is added to the north, with a tower drawbridge. The castle is abandoned from the Wars of Religion, at the end of the sixteenth century until the early eighteenth century. The castle is taken over from 1706 by Bishop Louis-Gaston Fleuriau Armenonville undertaking to transform the residential amenity and makes rework parts dating from the thirteenth century and early sixteenth century. To him we owe the great southwest façade surrounding a courtyard and south wing of the building. From 1771 it is the residence of Louis-Sextius Jarente bishop of La Bruyere, who continues the work begun by Fleuriau Armenonville and had decorated the castle with pomp. A chapel of neo-classical style, decorated with statues of Francis Delaistre, was added in 1784. The park is laid out in English, with a lazy river. A small plane octagonal bandstand, an orangery and a cooler are built in the park. At the French Revolution, it was sold as national property and acquired by a private owner. The park is ranked 16 September 1942. The ruins of the old castle (the tower Manasses of Garland) are classified historical monuments 8 September 1988; the castle and its outbuildings are classified 26 January 2004.

How To Get To Château de Meung-sur-Loire (Map):